In a small community not far from my hometown, Paul sat peacefully in his self-built abode on a July day like just about any other. Happy to experience the peace of his bucolic life far from the hustle and bustle of the city, he rarely visited a doctor despite a festering back ailment that limited his ability to work. He had no retirement savings and no plan for life after retirement except for Social Security and Medicare, a not-uncommon trend for this region. His assets consisted of his home and vehicle in addition to about $600 in his checking account.

A tightness emerged in his chest, and after about half a day of unrelenting and slowly progressive discomfort, he called 9-1-1. Testing revealed a familiar scenario. It was a heart attack. The main artery supplying the right side of his heart was blocked. Physicians told Paul that he would not have survived had he waited 2 hours longer.

He was taken to the nearest specialty center over an hour away, where angioplasty was performed. Incidentally, it was the same hospital where I was born, now staffed in part by specialties from university physicians commuting from the state’s only medical school about 250 miles away.

It became clear during recovery that damage had been done. The right side of the heart contains the area responsible for setting the rhythm of the beating heart. The night after his procedure, his heart went into a dangerous rhythm. He was now at a risk of spontaneous heart failure and would require an implanted defibrillator. He told his daughter that he wasn’t ready to depart from the earth yet and asked that all measures be exhausted in the event of another incident.

After the defibrillator was placed, and Paul was ready to go home, his family had begun the process of procuring social resources to help him with his new baseline. He lived alone and was facing an uphill battle. Having met his health insurance deductible for the year, only now, he was amenable to addressing his back pain on an outpatient basis.

While many of us are often concerned about counterproductive levels of overutilization of health resources, this is clearly a case of underutilization. Especially in times like these, some people aren’t comfortable going to the doctor, some feel unsatisfied with medicine in general, and some just can’t afford to get another bill of any sort in the mail. Though I never met him, he seemed like the prototype for a different sort of American dream. He had what he needed–sports on the television, a roof over his head, a pair of loving daughters, and a group of friends to play fantasy football with.

I received a concise yet shuddering text message from Paul’s daughter shortly after his discharge from the hospital. My dad is gone. She had just taken him home from the hospital and was getting him groceries and his new prescriptions when he called to say that he was having another heart attack. The paramedics could not revive him this time. The damage from the original event must have been too extensive for the implanted defibrillator to overcome. He had just turned 57.

As a physician, I see things like this happen too much. Health care professionals know the likelihood of outcomes such as this one, and truth be told, I often worry that my professional encounters with life’s vicissitudes make me seem to be a less compassionate source of support for my friends and family. Paul’s daughter isn’t just my friend; she has been the center of my life since she moved away from her family and our home state in 2015 to be with me. She stood by me when my mother almost died five years ago. My dad still resides there, essentially living the same American dream as Paul.

Still, though, Paul died too young. As a health system, we failed him. We apply hospital codes to reimbursement tiers for hospitalizations that encourage facilities to discharge as quickly as possible. Despite the power of our economy and American innovation, we still haven’t figured out a way to control the underlying conditions that cause those hospital charges to happen in the first place. Paul’s story serves as yet another example that we do not have a health system. We have a payment-for-sickness system, and we can’t even get that right.

As the mandatory business shut-downs in March and April precluded me from my exercise routine, I started slowly down the path of worse health. I was able to reverse that course because I could afford to switch up to healthier food options and purchase in-home exercise equipment in May and June. Some people, like Paul and my immediate family in rural America, simply don’t live in places where satisfying meals are readily available at a reasonable price. We pay for this in our health insurance premiums and loss of economic productivity, but more importantly, we pay for this in loss of precious life.

It remains prescient that the people greatest affected by our current pandemic have underlying diagnosed or undiagnosed conditions that are serious public health concerns. We halted vaccine research after the last two coronaviruses dissipated on their own, and now we are stuck in a purgatorial pandemic state in which Paul could only see one family member at a time in his final days. This is what happens when profit is a prerequisite to innovation.

Rest in peace, Paul. I’m sorry that we never met, but you were loved by your family more than you know. 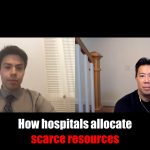 Second victim syndrome in the time of COVID-19