This time last year, many of us were bewildered that our country and the world had been halted by a newly declared pandemic caused by a novel virus. Reports from physician colleagues on both coasts terrified me. Fast forward to June 2021, and 272 people in Midland have died. Two hundred and seventy-two mothers, fathers, aunts, uncles, sisters, brothers, sons, daughters, friends, patients, co-workers, partners, spouses are gone.

Daily I think about those people. Some people would say that it could have been worse, which in a way, is accurate. But in the same breath, it also downplays and belittles the existence of these special ones and their memories.

I also think about the ones that might not have died from COVID, but the pandemic itself killed them. COVID created or contributed to loneliness, despair, addiction, depression, and the overall will to live. They all deserve to be remembered. Each one. We owe it to them to contemplate and examine the last year and the resulting outcomes.

Lots of things from the past year were just not fair. Not in the way a petulant child cries out “not fair” but unjust and downright unreasonable. Canceled trips, truncated school years, empty theaters, rescheduled weddings, funerals held over the internet, jobs lost, businesses shuttered, savings accounts drained. Several of these injustices specifically replay in my mind– medically vulnerable folks going months without human touch and connection and those who had to take their last breaths holding the hands of strangers. Those truths will likely leave lasting scars on so many.

There has always been a lot about the world which we as humans do not know – individually and collectively. Before the pandemic, this was also true, but we focused time or energy upon other things. A recognition that random events play a bigger part in our personal solar systems than we realize might keep us grounded. And by that, I don’t mean living with constant trepidation, but by keeping us humble. We control extraordinarily little in life. The shocking reality is we never had control, but we were exceptionally good at fooling ourselves into thinking we did. Planning, scheduling, executing said plans and schedules were all done with nary a concern for anything beyond a potential canceled flight. A 100-nanometer virus upended all those plans and schedules.

Life is short. Too short. I’ve struggled and wrestled with the seeming randomness and disparity of time for those we love, in past and present tense. Life doesn’t dole out the same amount of time for everyone. The pandemic made me wonder if those we lost were better at making the most of their time. Did they squeeze more meaning out of their moments? Was their work here done?

Physician colleagues and I discussed we read more primary scientific journal articles during the past year than we have in the decade prior. But I learned far more from experience than from scholarly literature: Life is too short; life will never be fair, and there is a lot I don’t know. These lessons make me realize how I was confident in fleeting things prior to the pandemic: time, knowledge, justice. These ideals must constantly be and, maybe, eternally pursued. They aren’t given or promised and should not be taken for granted. I need to work at making the most of my time, continue to learn and unlearn and relearn, and create fairness in situations where it might not currently exist. I lived to be right instead of living to get it right.

Someone stolen from us by COVID lived correctly – to get it right. She would see an injustice because she always looked beyond herself. She saw beauty everywhere she went. Even though things were not perfect for her, she kept her eyes and heart open to see what was really going on around us. She noticed kids in Midland without homes. She saw people suffer who did not have access to early treatment for COVID. But her observations did not stop there. Many of us see things long enough to be shocked or complain or be outraged. Few of us dig in to find a solution when we have nothing to gain. She did. All in an attempt to get things right. Her life was too short. It isn’t fair. I don’t know why. I did learn that.

Maybe, just maybe, though, it was so those of us left can kindle those sparks of curiosity about others long enough to get it right, look for the beauty around us, and to continue with the work yet left to do. 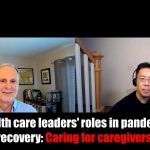 Our niche world demands a new approach to health