Most people have heard the joke about rabbits and vitamin A: “Are carrots good for your eyesight?”

Vitamin A, one of the essential groups of vitamins, is necessary to develop the retina in the eye. This area at the back of our eyes is involved in achieving low light vision and color vision. Deficiency of this vitamin is a common cause of blindness in the third world.

In addition to carrots and other vegetables, vitamin A is also plentiful in fish and liver.

Carotene is an essential part of vitamin A and is also responsible for the yellow coloration in some vegetables.

Despite Bugs Bunny and Elmer Fudd’s quaint antics, rabbits do not live on carrots and will seldom eat any root vegetable.

So, is it a myth that eating carrots will improve our eyesight? Yes, it is a myth. But a deficiency of carotene/vitamin a will harm your night vision.

Don’t feel let down by this myth: Bigger fish than us have fallen for it.

In World War 2, the British developed a technique for detecting enemy bombers before reaching the English Channel (thus allowing air raid shelters to be accessed quickly).

This method was called the Airborne Interception radar.  British Intelligence did not want Germany to know of their secret weapon; large numbers of enemy aircraft were being shot down before the bombing raids even began.

Through counter-espionage, the allies spread a rumor that British pilots were fed a diet of carrots, allowing them to have superior night vision and intercept the enemy.

As the Luftwaffe’s tactics changed to night raids, their bombers were met with ferocity by crack pilots, such as Lt. John Cunningham, nicknamed, “Cat’s Eyes Cunningham.”

When the press asked this homegrown hero what the secret of his success was, he put it down to a love of carrots.

Stories of truckloads of carrots being shipped from Spain for Luftwaffe pilots were spread far and wide; it’s not certain whether this ever happened.

The World Carrot Museum is a virtual museum composed of 125 pages of amazing scientific facts about the orange vegetable. Its curator, John Stolarczyk, believes that the war ministry is totally responsible for propagating this carrot myth for better eyesight. As to whether the Germans bought the story-he is unsure.

An upcoming book by Mr. Stolarczyk, How Carrots helped win World War 2, may shine further light on this. The fact that Hitler himself was a vegetarian may have given traction to this belief.

In ancient Greece, carrots were believed to have anti-laxative properties, which bound one’s bowels. The soldiers in the Trojan Horse survived on carrots so as not to give the game away.

So, given the orange vegetable’s supposed role in the history of warfare, it’s not too surprising that a myth like this would spread far and wide.

Care is no longer personal. Care is political. [PODCAST] 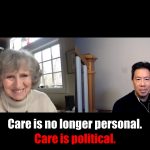