“Don’t go out tonight,
‘Cos it’s bound to change your life,
There’s a Bad Moon on the Rise.”
– Creedence Clearwater Revival, August 1969

On a summer’s night on the St. Lawrence River, I have sometimes extended my boat journey and navigated home by moonlight. It’s remarkable how much can be seen after sunset if there is a clear sky, and a moon to guide you.

Myths about a full moon are everywhere!

I would like to address 3 common claims that have arisen in conversation.

Starting with psychiatric crises: Can we really tell if they are more likely to occur on the night of a full moon? Some people clearly think so. I know medical colleagues who change their shifts if they discover that they are scheduled for night duty on a full moon night.

The myths related to the moon need to be seen in the context of how important astronomy was in human history.

We know that the moon can move oceans, but some believe that the gravitational pull can also affect body fluids’ movement and thus affect behavior.

Shakespeare’s Othello said that the moon came too close to the Earth and made men mad.

We ourselves frequently ask if there is a full moon out when we encounter bizarre events.

Clarity and visibility under a full moon are 12 times brighter than that experienced during the first quarter.

Therefore until the mid-1800s (Gaslight), the full moon permitted activities that would be impossible otherwise. Travel by ship, for instance, was the main mode of transport until the 20th century.

Several researchers have looked at the moon’s effect on mental disturbance, Psychiatric admissions, suicides, and homicides.

Over the past 40 years, studies and Meta-analyses found small or no increases in behavior disturbance in the nights of a full moon. However, they were not compared with the other phases of the cycle.

In 2017, a study in Advances in Mind and Body Medicine looked at psychiatric presentations to an emergency department in a community teaching hospital over 41 months. A total of 1,857 patients over the age of 17 years were assessed for mental health emergencies.

483 were during the first quarter.

So, the lowest rate of presentation was on the night of a full moon.

So what does happen under the light of a full moon? More outdoor activity, for sure.

In 2017, the BMJ published a study that looked at motorcycle accidents in the U.K., Canada, USA, and Australia over a 30 year period. In this study, they compared accident rates on the night of a full moon to a night one week earlier and a night one week later.

So what about dog bites during a full moon?

I’m not at all sure that dogs or even wolves do howl or bark at the moon. Increased activity levels on the night of a full moon might explain the barking.

Two studies, again in BMJ in 2000 and in 2003  looked at animal bites in emergency departments on a full moon.

Both studies concluded that animals, in general, were more likely to bite within 36 hours of a full moon but that dogs however, were not as likely to bite as other animals. The increased incidence was marginal, and the evidence was weak. Perhaps, like us, they are out and about more.

So, overall, the folklore about full moons is lacking in evidence. Lunacy, therefore, must have another cause!

Putting on my daily máscara 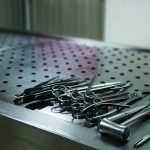