The cab driver pulled up to a small house, typical of the post – WWII era. He honked his horn and waited. He honked a second time, but no one came. He contemplated leaving, as it was near the end of his shift, but decided to go knock on the door. Through the door, he heard a voice and something scraping across the floor. The door slowly opened and a frail, elderly woman, with several suitcases at her side, stood before him. She appeared to be in her 90’s. There was a noticeable sadness about her.

She thanked him for coming as he helped her down the steps to the taxi. He asked where she wanted to go, and she quietly responded, “to the hospice home.” She explained that her doctor had told her she had less than six months to live. She had no family left to care for her. Her husband had died a few years before. Suddenly she said, “Could you take me downtown?” Hesitantly, knowing it was out of the way, he agreed. He drove slowly through the town where she had lived her entire life. She was seeing it for the last time. Her eyes glistening, she reminisced of times long ago – the building where she had her first job, the park where her husband first kissed her, the matinee theater, dance hall, soda shop … her children. After two hours, they arrived at the hospice home. She asked how much she owed. With tears in his eyes, he turned off the meter and told her there was no charge. Helping her into a waiting wheelchair, she thanked him again and said, “You gave an old woman a little moment of joy.”

I read the above story on social media and was deeply moved. We often care for those nearing the end of their lives. It is so easy to see them as another old person with their myriad of physical problems, increasingly dependent upon others. We forget that once they were young, vibrant, strong, navigating life as best they could. They have their own stories if we would only take the time to ask – where did they grow up, what did they do for a living? Simple questions that could open unexpected windows allowing glimpses into their lives and hearts.

I always asked my older male patients whether they had served in the military. Many of my most memorable stories came from that question. History came to life – Pearl Harbor, Guadalcanal, Tarawa, Iwo Jima, Omaha Beach, the Battle of the Bulge, the 8th Air Force over Germany, Chosin Reservoir, Ia Drang – bloody places, costly places, still very much alive in the recesses of their minds. I treasured these stories. In their telling, you could see a glimmer in their eyes, hear the pride in their voices, and, for a moment, see them as they once were – young, strong, their entire life ahead of them. 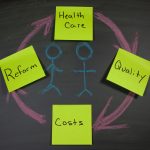 Meet the physician who loves his job