The hands were heavily stained black, the skin with severe eczematous changes, yet she did not mention them. She was a young mother who had come to the clinic to have her six-month-old baby boy seen by the “doctors from America.” I was the team leader of a faith-based medical team serving in the outskirts of Nouakchott, the capital of Mauritania in Northwest Africa. We were there to provide primary medical care and public health teaching in support of a wonderful Swiss couple who ran a malnutrition clinic for the children of this impoverished country. Mostly, though, we came to love and serve.

Nouakchott is on the edge of the vast Sahara Desert. The people we served had been primarily nomadic as had their ancestors for centuries before them. They had been forced by an extended drought (who knew a drought could even occur in the Sahara!) to find another way to survive. The physical and emotional needs were as great as I have seen in 20 years of leading medical missions internationally.

I examined her baby and reassured her he was healthy. My eyes, though, kept going back to her hands. Finally, I asked to see them. Painful fissures traversed the blackened skin. I asked about her work. She had two jobs – one washing dishes, the other dyeing cloth, her hands exposed daily to hours of hot water and caustic irritants. She had no gloves to protect them, no moisturizer to soothe and heal them. She simply did what she had to do to provide for her family.

She was typical of the Islamic women we saw that week. Her face unseen, hidden by her “malafa,” a scarf wrapped over the head and covering the face, leaving only the eyes exposed. Her eyes were dark, intense, reflecting an inner strength and determination. I told her how much I respected her for being the strong woman and mother that she was. She sat up straight and looked at me, her eyes “smiling” back. She thanked me and stood to leave. I signaled for her to sit down. I gave her the remaining skin moisturizer I had brought as well as all my exam gloves, anything that might protect her hands and provide some relief. She thanked me with a nod of her head and the look of her eyes, and left, her baby held closely. I wondered what would become of her and her baby. Did she have hope that her life would get better? I wanted to believe so. To live without hope is not to truly live.

The majority of people in the world live with no hope of things getting better. Every day is a struggle to survive. Each of you has seen this, too. It may be that patient facing a critical illness, grieving the heartbreak of loss, or experiencing the devastation of Alzheimer’s. In the busyness of life, may you not miss “the hands” in front of you. May the needs of others become personal to you as they become more real to you. Thank you for seeing that need and going to it. In doing so, you bring hope and with hope you bring life, and that makes all the difference.

Individualism vs. the common good: It is time for the pendulum to swing back 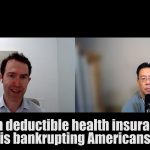 May the needs of others become personal to you
2 comments