As I was preparing for my next medical mission, I began to think about the word “minister.” Obviously from a religious standpoint, it has certain connotations, one of which is “to serve”. When you are ministering to someone’s needs, you are serving them.

This caused me to think of my dear friend in Nepal, Fahad. Fahad is a young Muslim physician with whom I had the privilege of serving and working during my first two medical missions to Nepal. I will never forget the first day we served together, working side-by-side. In the four and a half days of clinic, we saw just over 4,000 patients, many with significant physical and medical needs. It was overwhelming with only eight providers to see them!

The first day was particularly hard as we had not anticipated such large numbers of patients. The weather was also very hot and humid. At the end of the day, we were all emotionally and physically exhausted. It was then that Fahad came to me with tears in his eyes and said these words that I will never forget, “Dr. Andy, I have never seen people like you. My entire life, I have been told to take care of myself, work hard, and prepare myself so that I could be successful. Then, if I have time, I could help others. But today, watching you and the team, I am learning that I am to put others’ needs before my needs, to serve others first!” I was completely blown away by this. He learned a lesson in one day that many people never learn or come to understand.

Servants have a servant-heart – a heart that is loving, obedient, and humble. People understand the concept of being loving and obedient but being humble, the act of showing humility, can be harder to grasp. Often humility is seen as being timid, or passive, or even weak. The reality is that humility is not that at all! In my office, I have framed on my wall a definition of humility that I came up with from different sources. I display it prominently to be a constant reminder of how I am being. It says:

Humility is not timidity. It is not an attitude toward ourselves. Rather, it is an appreciation of other people. It is a respect for them as persons of worth, a recognition of their abilities, a willingness to receive from them what they have to offer.

Every day in the hospital and in your practices, when taking care of patients, healing them, comforting them, you are ministering to them. You are serving them. You are putting them first. You are a servant with a servant heart, and I am most grateful for you. 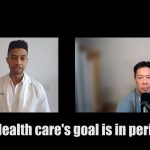