A recent edition of Pediatrics has some disturbing research: “Trends in Capability of Hospitals to Provide Definitive Acute Care for Children: 2008 to 2016.” What the paper really does is document what many of us who work in referral hospitals have noted for some time: More and more community hospitals are transferring children who appear in their emergency departments to other, larger facilities instead of admitting them to their own hospital for definitive care. At first glance, one might ask if this could actually be a good thing. After all, isn’t a higher level of capability better for sick children? But it looks to me more as if they just don’t want to provide definitive pediatric care, even for fairly routine things.

We analyzed emergency department (ED) visits by children between 2008 and 2016 using the Nationwide Emergency Department Sample, a weighted sample of 20% of EDs nationally. For each hospital annually, we determined the Hospital Capability Index (HCI) to determine the frequency of definitive acute care, defined as hospitalization instead of ED transfer. Hospitals were classified annually according to 2008 HCI quartiles to understand shifts in pediatric capability.

The results showed a progressive and steady decrease in children admitted to the original hospital but rather transferred to another facility. This is illustrated in the graphs below, which show EDs stratified by their capability to render definitive care for children. 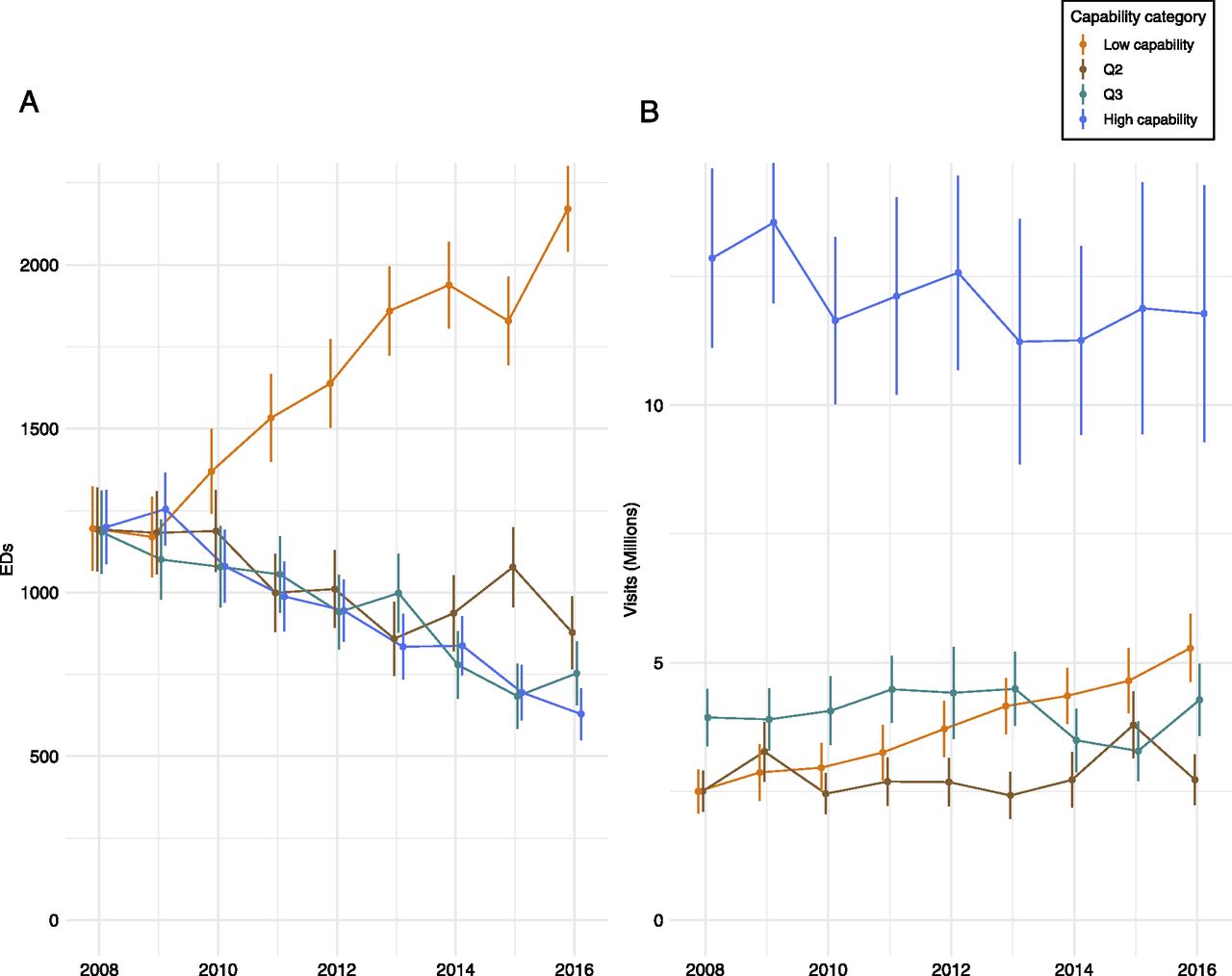 The panel on the left (A) shows the trend in EDs able to provide definitive care. You can see there was a quite dramatic rise in the number of EDs unable to provide this (orange line — lowest quintile). The blue line shows the highest capability EDs, and there was a drop in those. So overall, there has been a shift in ED capability from higher to lower capability. The panel on the right (B) plots ED visits by children over time. The only real change was that the number of visits to the lowest capability EDs actually increased over time. So more kids are appearing at facilities unable (or unwilling) to care for them. Note that the number of highly capable EDs in panel A actually has gone down, adding more stress to the system.

This graph presents the same trend in a little different but useful way. It simply plots the raw number of EDs that went up in capability or went down over time. Far more went down than up. 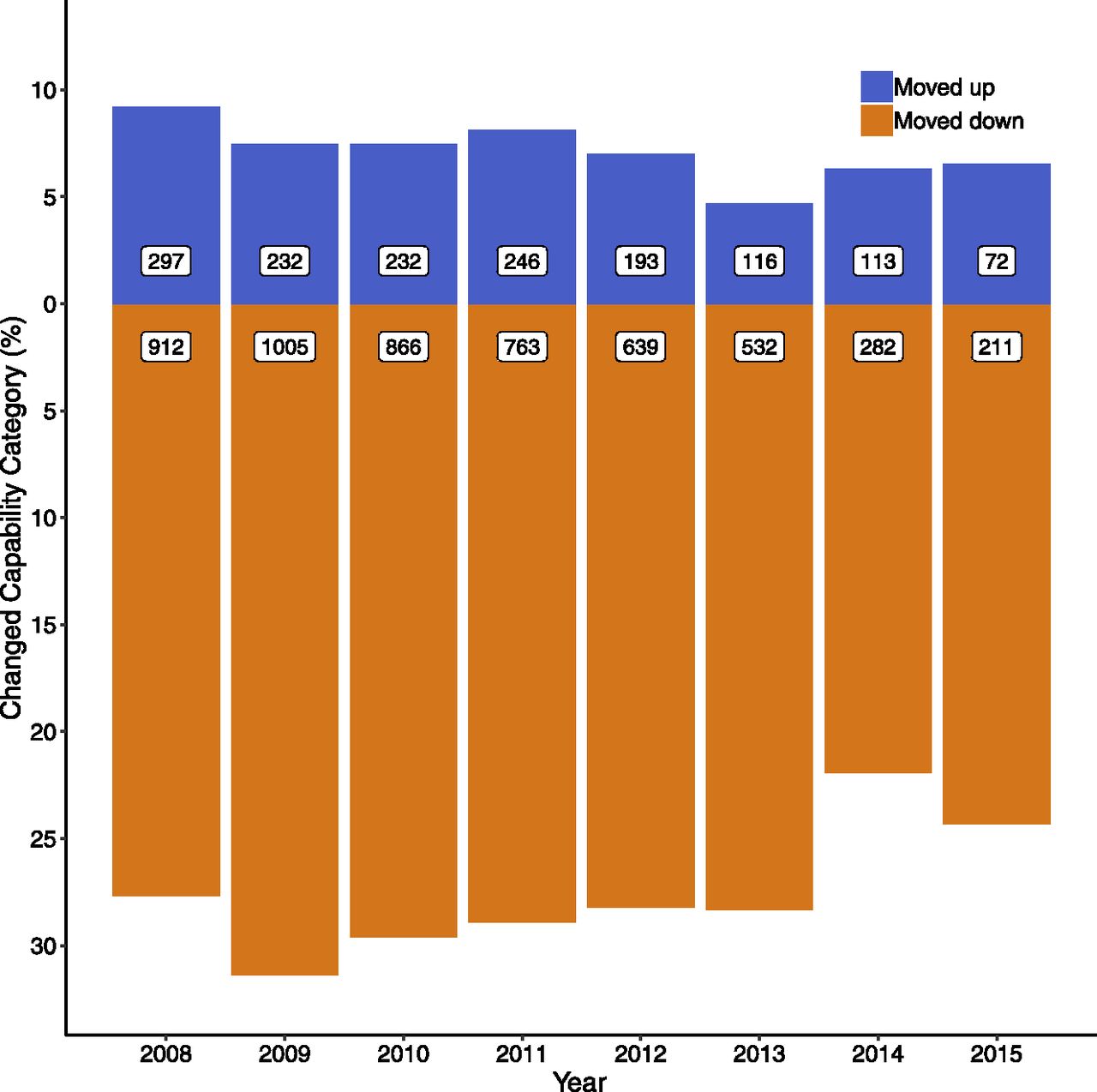 So what’s happening? Is this a manifestation of a good regionalization of pediatric care, of providing children better care? I doubt it myself. It would require one to postulate pediatric care a decade ago was not very good, and now it’s much better. One could argue the standard of pediatric care has risen and that smaller hospitals cannot meet this higher standard, so they appropriately transfer children. But that explanation seems doubtful to have developed over such a short time — over my 40 years of practice, probably yes. But not over just ten years. Not surprisingly, this trend hits rural hospitals particularly hard. Transfer distances are long, can take hours, and are expensive and not risk-free. They also can be hard on families. An accompanying editorial, “Emergency and Definitive Care for Children in the United States: The Perfect Storm,” is succinct:

I have my own anecdotal take on this. I spent much of my career at a large tertiary facility 40 miles away from the town I grew up in. My father was a pediatrician in that small town for 50 years, and I myself worked in that hospital during my college years. Occasionally in my capacity as transport director at the tertiary facility, I would get a transfer request from my home town. Several of the older nurses, who knew me and my father well, would often say something like: “Your father never would have transferred this child. How times have changed.”

What we don’t know, of course, is if this trend leads to better outcomes. I do hope the authors will continue their work to answer that key question. But in their discussion, they doubt it. So do I. Me, I think it’s mostly about money, as many things are. It’s hard to make money off children admitted as inpatients, especially if they are on Medicaid. Administrative costs are high because admissions tend to be short, and children typically don’t require all the profit-generating tests and procedures adults do. I think more than a few hospitals are trying to offload this cost under the guise of securing better care for children. This research demonstrates it’s not about patient volume. It’s possible physician unwillingness to admit these children also plays a role. It adds to their already heavy workload. But whatever the cause, or more likely causes, it can’t go on. 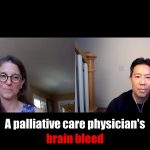