It’s very hard to find a product or service that is both lousy and unaffordable. Such expensive duds are usually quickly replaced by cheaper and better competitors. Prior to the Affordable Care Act, health care was becoming more expensive every year while simultaneously becoming less convenient, less personal, and less satisfying. In 2009, I wrote a series of four posts explaining how the health care marketplace reached such a sorry state and offering a suggestion for reform.

Since then, the Affordable Care Act has passed. For many, insurance has become much more affordable, but whether this translates to better or more affordable care remains to be seen. If it results in many patients receiving affordable insurance that very few physicians accept, then the situation will be a repetition of the Massachusetts experience with universal coverage: Everyone has insurance; no one has a doctor.

At the same time, the intrusive and complex bureaucracy that physicians must navigate to collect insurance payments has vastly expanded. Physicians are now coerced into serving as the workforce for Federal plans to collect health care data, cut costs, and make their care increasingly legible to payers but increasingly opaque to patients.

Bear with me for just a few examples. In an ill-advised plan called “meaningful use,” physicians receive incentives for submitting complex reports documenting their use of electronic health records (EHRs). The time and effort required to comply with this program has earned it much scorn from physicians. And the incentives will likely distort the true value of EHRs and inflate their costs.

The International Classification of Diseases (ICD) is the coding system used by physicians and billers to report to insurance companies patients’ diagnoses. In October, the government will update ICD to its tenth version. ICD-10 will contain radically more complexity than its predecessors. It is widely ridiculed for the detail with which diseases must be reported. (Code V91.07XA is for a “burn due to water-skis on fire.”) The transition to ICD-10 was already postponed once, and I predict it will cause much disruption and grief.

My last example is the recently passed sustainable growth rate (SGR) fix which gets rid of the annual congressional scramble to increase Medicare reimbursement to physicians by increasing reimbursement in the short term, but tying reimbursement to outcomes measures in the long term. This is sure to become a data collection and reporting hassle that makes doctors long for the simpler days of meaningful use.

I honestly believe that there has been more bureaucratic complexity added to the typical physician’s life in the last few years than in the twenty years before that. None of it cares for a single patient.

Two weeks ago, my family and I spent ten days visiting New York City. We had a wonderful time. The services that completely transformed our experience were the ride sharing services of Uber and Lyft. We never used public transportation. We never hailed a taxi. For longer trips (and a family of five) this was likely cheaper than train tickets. For shorter trips, it meant not handling cash, never finding bus or subway stops, and never referring to transit schedules.

For years, passengers complained about high taxi prices and poor taxi service, and potential competitors complained about the legalized monopolies given to taxi companies by city governments. But rather than bang their heads against these barriers, companies like Uber and Lyft just started giving people rides.

This was an epiphany to me. I had always assumed that fixing the health care marketplace would mean political reform — undoing the myriad laws that substituted insurance for health care and caused prices to skyrocket, and dismantling the byzantine bureaucracy that physicians must navigate. Now, I understand that political reform is both unrealistic and unnecessary.

Doctors and patients aren’t waiting for political reform. More and more doctors are “going off the grid” to provide excellent care unencumbered by insurance regulations. Concierge primary care is just one example. The Surgery Center of Oklahoma lists on its website the prices for every surgery it offers. The prices are all-inclusive. You won’t get a separate bill from the anesthesiologist, the surgeon, and the facility. And they don’t care what insurance you have because they won’t deal with any insurance company. Other innovative companies are using video conferencing technology to connect patients to doctors thousands of miles away. LUX Healthcare Network (with which I’m proud to be associated) is building a multi-specialty concierge physician network.

I argued six years ago that using insurance for routine care is wasteful. I now realize that attempts at universal coverage and the bureaucracy that comes with it — ICD-10, meaningful use — will never be repealed. This bureaucracy will become the taxi monopolies of health care — increasingly ignored by both doctors and patients and increasingly irrelevant. The successful enterprises in health care will connect doctors and patients and then get out of the way. Like Uber and Lyft they will help patients find the service they want at a price they’re happy to pay, and they will facilitate not regulate the delivery of excellent care. 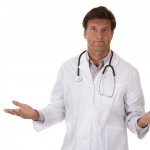