In a world rife with admonishments like “Do your own research” and “trust your intuition,” I don’t hear about anyone reading up on human fallibility.

Picture this scene: a lecture hall in a respected medical school. The students are early in their education, confident in their abilities to learn material and ace exams. After all, that’s how you gain admission. They’ve just watched a video about the placebo effect, learning for the first time that placebos are 30 percent effective.

The professor, in this case, is a woman who is likely in the middle of her career. She carries herself with the ease of practice as she instructs the students to take a test they haven’t studied for. Aware of the power they will soon yield, and sure of their future abilities to discern who needs medication and who does not, many of them answer affirmatively to the question of whether they would prescribe a placebo in certain situations.

Fortunately for them, failing that test will not eject them from medical school. Also, fortunately, it will leave a lasting impression. One-third of the time, the human brain believes something that cannot be true.

The following week, the same understated professor asks the medical students to consider whether marketing will influence their prescribing practices. None of them believes they would be swayed. She smirks. “Nevertheless,” she admonishes, “pharmaceutical companies would not be spending billions of dollars on marketing to physicians if it did not work.”

Back then, direct marketing to patients was not allowed. There were also fewer voices countermanding data, like those now publicly insisting on “alternative facts” and accusing doctors of political posturing when they try to raise awareness about, say, the pandemic. As far-fetched as it should be for a layperson to believe they know more than someone with over 10 years of secondary education, emotionally-charged testimonials have convinced many that their intuition is wiser than their doctor.

And that is where that logic falls apart: If doctors are susceptible to marketing, even after being trained to resist it, the average patient would be at least equally so. If it were really possible to make an informed decision without the counsel of someone with medical training, one would have to take into account their own weaknesses.

Testimonials are powerful. Those trained in the scientific study know not to trust the “n of 1” — one person’s experience should never define policy or best practice for others. Lay research cannot possibly teach this key scientific principle, and it does not try. What does it mean for a study to have adequate power? Can the masses be taught to discern good information from bad?

Most of the time, I don’t think so. Clinging to the illusion of control over wellness, most consumers of social media medicine just want assurances that their intuition can override illness, and “natural” is what matters. Placebos abound, and when ethics forbid doctors from endorsing unproven therapies, consumers delight in “knowing more,” conflating the perceived benefits they experience with the universality of benefit we should demand of anything considered medically useful.

Facts should speak for themselves, but when even these are subject to placebo effect and marketing, they don’t. The only way forward is to share the map to knowledge, beginning in high school. Seeing the strings behind the curtain — the ways that marketing works, and that disinformation spreads — might be the only way the average person can truly make their own informed decision.

And then, when we speak a common language, perhaps the fragmented doctor-patient relationship of current times has a chance of being put back together again.

Claire Unis is a pediatrician and can be reached at Literary Arts in Medicine.

From advocate to adversary: How COVID-19 has changed the doctor-patient relationship 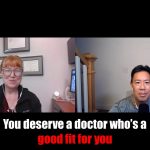