Last week, I became involved in two situations of pain between the eyes that seemed to potentially be presentations of very serious medical conditions.

Autumn took a call from her sister late on Friday afternoon. Her sister had been tested for COVID the day before and told Autumn she instantly felt a severe pain between her eyes and developed a nosebleed as soon as the nasal swabbing was completed. The nosebleed stopped, but the burning pain at the bridge of her nose had continued in spite of over the counter pain medications and the passage of 24 hours.

It was obvious that whoever did the nasal swab was under the impression that human nasal passages run upward at the same angle as the nasal bone and not horizontally. It was obvious that this had caused pain and a nosebleed. But the amount of pain seemed dramatic. I don’t know Autumn’s sister very well, but she never seemed melodramatic to me. I asked to talk to her myself.

“Do you have a nasal discharge from that nostril?” I asked.

All I could think of was a cerebrospinal fluid leak. This can happen with nasal trauma, I knew, and a quick internet search even turned up a case of this happening from a nasal swab for the coronavirus.

“You’ve got to go to the ER, and you need a CT scan,” I told her. Autumn told her she’d meet her there. I asked her to keep me posted. By 8 p.m., the scan was done and reported negative by the radiologist, working in a different time zone.

Autumn texted to me that the ER doctor called it a contusion. I wasn’t sure exactly what that was supposed to mean — a contusion of what, exactly. But I had done what I could and did not feel I overreacted by telling her to go to the ER.

The very next day, I saw a young man with a pain between his eyes that got worse when he leaned forward. He also had decreased libido and mild erectile dysfunction, all for about two weeks. He had no nasal discharge, no visual disturbance and nothing abnormal on ENT or neurological exam.

My thoughts went to a pituitary tumor or a brain abscess from a sinus infection, but perhaps he was just feeling under the weather from an ordinary sinusitis. On a Saturday with no option for a same day CT except if I sent him to the ER, I prescribed a strong antibiotic and cautioned him to seek care if anything got worse or if all three symptoms didn’t clear after a few days of the antibiotic. After all, I told myself, his symptoms had been stable for some time and a few days would probably not alter the course of events.

Whether we take a phone call or see a patient in the office without any availability of diagnostic tests, sometimes all we do is triage and best guessing.

I slept soundly both Friday and Saturday night.

As the old adage goes: Medicine is a science of uncertainty and an art of probability. 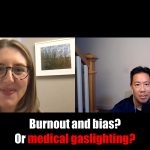 The art and uncertainty of triage
1 comments