We live in incredible times.

A time when a millennial with a YouTube account clears six-figures a year (sometimes, seven figures!) with just a computer and a webcam.

A time when a small-town girl with a love of fashion and an Instagram account can go from Nowheresville, America to front row at New York Fashion Week.

A time when the shy girl in the back of the classroom amasses a following of hundreds of thousands of like-minded shy girls through her writing blog.

But when it comes to media and medicine, where are all the women?

Sure, there are plenty of young female physicians, residents, students, and pre-meds in conjunction with fashion scrub brands featuring jumping pictures and healthcare content.

But beyond social media, do we have a female to match Atul Gawande? Kevin Pho? Sandeep Gupta? Mehmet Oz? ZDoggMD? Or even, Dr. Phil?

Where my ladies at?

Women, as the historic underdogs of medicine, suffer from a degree of imposter syndrome perhaps not as pronounced in their male counterparts. We are happy just to be part of the club now, having been banned from it — medical schools, training institutions, academic positions — in the past.

In the recent push for women empowerment, though, women are commonly told they have a voice. However, that does not beget an intrinsic belief that they have a voice, nor a feeling that they can share that voice in a meaningful way.

This is when stepping back — and viewing yourself, as a female physician, in the greater scheme of all women — is particularly astounding.

You will realize you have combated decades of gender bias just to get to where you are.

You studied, rounded, and rotated for years just to be able to be called “doctor.”

You have worn those horrible ‘unisex’ (aka male) baggy hospital scrubs and fought to have people recognize you as a physician and authority.

You came up with clever retorts when patients consistently called you “nurse.”

And, you did it while being the source of life and sustenance (all you breastfeeding mom docs!) for perpetuating the human species.

Every female physician can go head to head with any man — but instilling that belief in us is the biggest challenge. Once you believe you have a voice, really truly believe it, sharing that voice is easy.

There exist many venues looking for content, ones that women can take advantage of to garner an audience. There are writing blogs, popular media news and opinion sources, videocasts, podcasts, social-media based campaigns, prime-time television features, nightly news features, and more.  They are all waiting to hear your incredible story.

These are the times when every nobody can become a somebody.

And you are definitely a somebody.

Health care is making the classic mistake that many startups make 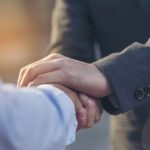 How every female physician can be a somebody
1 comments