The public’s apparently insatiable appetite for medical drama continues unabated as yet another prime-time TV show set in a hospital has hit our screens. FOX’s The Resident has generated discussion like no other. This may simply be due to the fact it’s the first major launch in the era of widespread social media, but it seems to have enraged a vast swathe of our ranks. Has The Resident crossed a line or have we become a medical “generation snowflake”?

Health care professionals don’t tend to admit that they watch medical shows. “Oh it’s too much like work!” is a common refrain, but magically most of us seem to have consumed ER, Scrubs, House, Grey’s Anatomy and many more. All of those launched before the advent of Twitter, so it’s hard to compare directly, but here is just a small selection of tweets provoked by The Resident. 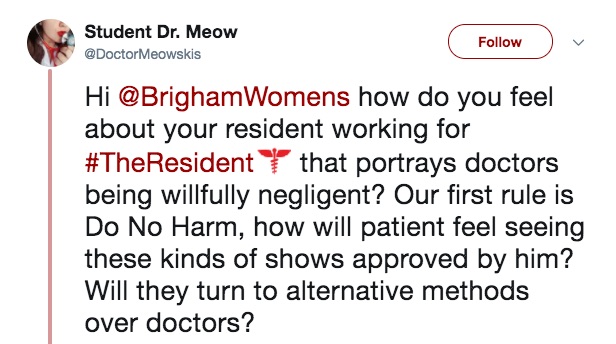 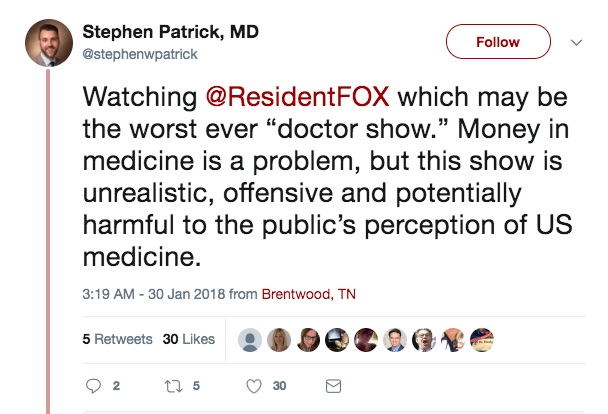 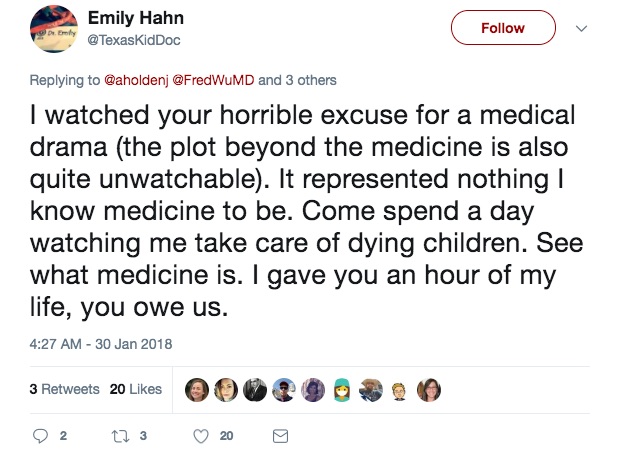 Lack of realism has never stopped health care professionals loving a TV show. Grey’s Anatomy is more soap than medical realism; House’s team were clearly the only people working at Princeton Plainsboro, forced to undertake every procedure themselves and whilst Scrubs has rightly won plaudits as most accurately capturing the banter and camaraderie that makes health care such a wonderful job, the medicine was rudimentary at best. But of course, it didn’t matter.

Don’t get me wrong: Laughing at ludicrous science on TV is one of my favorite pastimes, but it’s done in jest and in the knowledge that we are not the intended audience. My non-medical wife watched the first three episodes of The Resident with me and confirmed it all “sounds pretty convincing,” although even she queried “wait, what specialty is this residency even in, they seem to do everything?” It’s fair to say FOX’s latest offering really pushes the boat of disbelief out, far into the lake of incredulity.

This is not to say attention to detail is irrelevant. The Martian and Interstellar are recent testaments to how striving for scientific accuracy can win praise and confer plausibility. The Resident is not setting itself up a gritty docudrama, but one has to wonder whether the ten medical consultants to the show were tied up at work during script run-throughs as there are so many ridiculous howlers.

In its attempt to reveal Matt Czuchry’s titular resident as an unconventional, brilliant doctor — hardly an original trope — the script presents examples of his genius which were (amputated) toe-curlingly cringeworthy. Co-creator and doctor Roshan Sethi previously stated, “If you’re not accurate, you risk being irresponsible to people who watch these shows,” which now seems like a foolhardy thing to say. The most heinous inaccuracy might be the Dick Cheney-inspired heart transplant storyline where almost every single aspect is wrong.

The reason the response to The Resident is noteworthy is that the source of the quite potent and often personal offense taken appears to be that we doctors are being depicted in an unfavorable light, which is a curious stance to take. The wildly popular Suits variously paints lawyers as money-grabbing, selfish, dishonest … OK, bad example. But consider any fictional depiction of police, pilots, soldiers or even New Mexico chemistry teachers. The public like watching flawed, twisted individuals because regular, everyday, honest people make boring television. FOX is under no obligation to care about the reputation of doctors amongst the general public.

What seems to have caused particular umbrage is that the creator and writer, Amy Holden-Jones, attempted to defend her creation on Twitter. She posited that there are bad apples in medicine, so what’s wrong with writing a TV drama about them?

One need only read the news to find examples of doctors concealing a problem that might make them unfit to practice, doctors undertaking unnecessary procedures for cash or falsification of medical documentation to avoid litigation. These are exceedingly rare, but they exist. While finding them all under one hospital roof is ludicrous, so is a Vicodin-addicted, drug-stealing misanthropic narcissist being in charge of Diagnostic Medicine for eight years.

The Resident’s plotlines don’t just suspend disbelief, they perform an appendectomy on it, lacerate its aorta and cover up its death. Yet there is much to like about The Resident. The racially diverse ensemble cast is excellent and mitigates many of the clumsily-delivered plot devices.

The first cardiac arrest of the series results in an unexpected return of output; most shows would’ve chalked this up as a win, but we learn that the young patient has suffered hypoxic brain injury. Those criticising the show for painting an unrealistic picture of doctors must also accept almost every other TV show paints an unrealistic picture of how cardiac arrests run, so this was a welcome plotline. As someone who regularly speaks to families about resuscitation, I would assert the media’s role in making CPR a magical panacea in the public’s collective consciousness is far more problematic than one TV show about dodgy doctors.

When at a bar, a male doctor’s cachet immediately goes up when he says what his job is, but after Shaunette Renée Wilson’s brilliant female surgeon is mistaken for a nurse by a potential suitor, she finds he is intimidated and loses interest when he learns her real occupation. Again, this is a refreshingly honest take. Episode 3 tackles an uncomfortable issue within American health care, namely that money and nationality drastically affect the quality of care one receives.

It is reasonable to be upset at the ham-fisted portrayal of medicine, especially as the creators appear at pains to say they have tried to be realistic. But taking personal offense at warped doctors on television seems self-defeating. The way the public perceives the medical profession is down to us, not a television production company. If a fictional show shines a light on the unpleasant but very real aspects of medicine, from corrupt administrators maximizing profits to health care disparity, it is not the show’s creators that deserve our ire.

Rohin Francis is an interventional cardiologist and can be reached on Twitter @medcrisis. 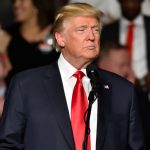 The fire and fury of Trump's diet 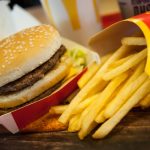 In defense of FOX’s The Resident
3 comments