“You’ve got to jump off cliffs all the time and build your wings on the way down.”
– Annie Dillard

Months ago, when my patient and his wife were in my office for the very first time, I could already tell that he would resist any display of sympathy from her and she would clearly be uncomfortable with ever being a caregiver for him.

There was tension in the room. He “had not listened” when she had told him to get the spot on the inside of his cheek checked. She “had gone off and told the kids” without asking his permission. They spoke over each other and past each other. Eventually, she looked at me. “We’ve been married 47 years, doctor,” she sighed. “We are both pretty set in our ways.”

He grunted. After telling them that he would most likely need a feeding tube for a while after his upcoming surgery, they both made it clear that there no way he would let her care for him and no way she would be able to do it. “Uh, uh,” he said. “Why can’t someone just come to our house and hook up the feedings three times each day?”

“I don’t think the home care agency will do that,” I said. “Many of my patients have worried about this. The nurses will teach you everything you need to know before you go home and the home care team will make certain you are all set up in the house. The whole process is straightforward. You can both learn to take care of this very quickly.”

She became adamant, as well. “Absolutely not! No way! What if some of the juices get on me? I can’t stand it! Just the thought of having to deal with mucus makes me sick!” They glared at each other and then at me.

“Well,” I said, “let’s explore all of the alternatives.”

They did explore several options but soon learned that their choices boiled down to learning how to use the feeding tube or sending him to a nursing home. Soon, they relented and resigned themselves to working together.  Arrangements were made, supplies delivered, schedules prepared, and jobs assigned. Life happens.

The surgery went well, and he did, indeed, need a feeding tube while he healed. After he went home, they adapted to the new routine, and she became adept at taking care of the details of the feedings as he recovered and then went through radiation therapy.

As his condition worsened, his strength waned and his dependence grew.  In addition to caring for the feeding tube, their routines now included weekly trips to the clinic and to the pharmacy. Caring for the facial wound became a challenging task. He was dying.

One day, they arrived in my office so I could check his status. I asked how things were going and she answered most of the questions for him. She assured me that his pain was well controlled. He was weak but content. He was sleeping more and more.

I checked the computer and saw that the tube feedings were keeping his weight stable. I looked in his mouth and measured the enlarged lymph nodes in his neck. A gauze pad had been carefully taped in place on his cheek, and I peeked under the corner to examine the growing ulceration. The opening between the mouth and the cheek skin — which had started as a pinhole — was now the size of a dime. Saliva ran down his cheek. I replaced the tape but, because the skin was wet, it did not stick very well.

After I finished the exam, I opened the supply drawer. I pulled out some gauze and a roll of tape and began aligning the dressing with the edge of the wound. The first piece of tape gave way as soon as I placed the second piece.

I nodded and stepped aside. She arranged the necessary supplies on the countertop. She methodically opened the gauze packets and snipped pieces of tape to the proper length, He relaxed and raised his chin, presenting to her the gaping defect in his cheek. She cleansed and dried the skin around the wound. After placing the gauze on his cheek, she guided his hand to where he could steady it with his index finger, then she added one piece of tape after another to affix the dressing securely. Once she had inspected the periphery of the dressing, she added one final reinforcing strip of tape to the lower edge. The outcome was perfect. Not a piece of gauze had been wasted. Not a strip of tape was out of place.

She stepped back and double-checked her handiwork. “There!” she announced.

He smiled again, then reached up to assess the security of the dressing. “She’s become quite a nurse, don’t you think?”

“Indeed.” I agreed. “Very nice.” My clumsy efforts to tape gauze to his face had been an attempt to dress a wound. She, on the other hand, had used the experience to tend a relationship. Together, they celebrated how they cared for one another using a ritual that involved gauze and tape and love. 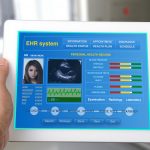 Physician burnout is caused by systems problems. Here's how to fix that. 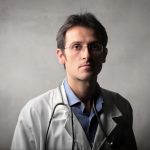