A few weeks ago I was following an online discussion conducted by a widely followed health site.

During the discussion, they had a physician who was giving out wellness advice to users via Twitter.

That physician had one tweet in particular that terrified me. 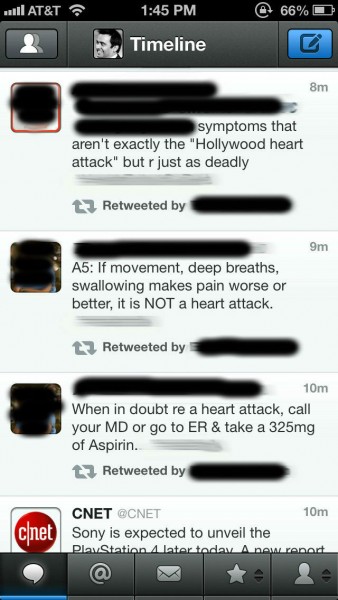 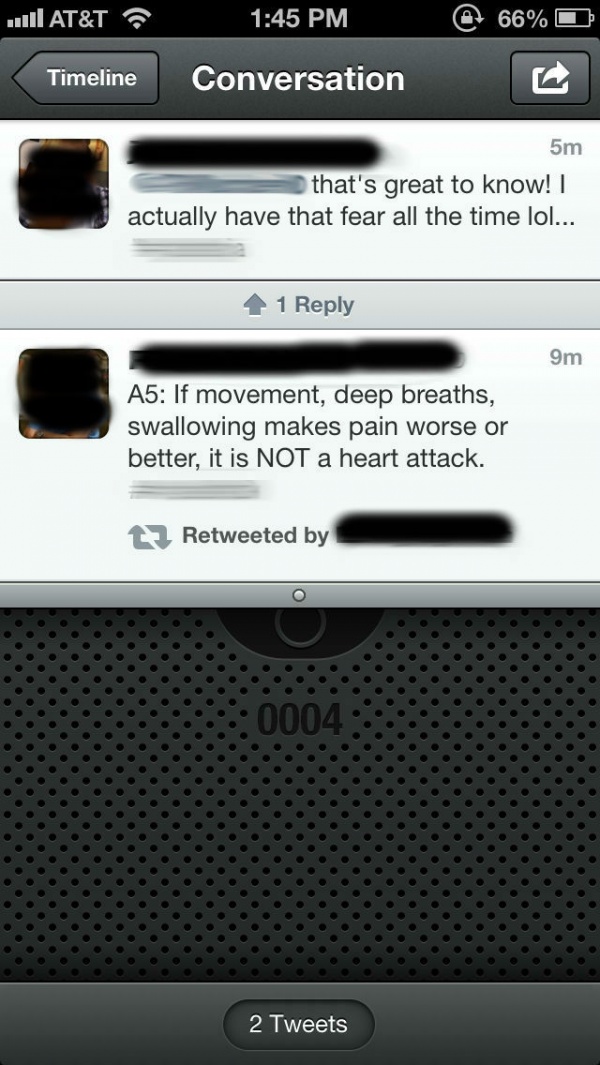 As the above screenshot shows, one tweet mentioned that when in doubt regarding a heart attack, you should call 911. Appropriate advice. However, the physician then sent out another tweet stating, “If movement, deep breaths, swallowing makes pain worse or better, it is NOT a heart attack”. Based on the number of followers of the health site promoting the tweetchat, up to 150,000 Twitter users saw these tweets in their timeline. The physician even had followers responding in thanks, an acknowledgment they will probably follow the advice.

If you were to tell any emergency medicine physician or cardiologist that symptoms such as movement, deep breaths, swallowing making pain worse or better is “NOT” a heart attack – we would not agree. Sure, it might be atypical chest pain, but we would certainly never say “NOT a heart attack”. There is good data that older patients, women, and patients with comorbidities like diabetes are more likely to present with symptoms other than “typical” chest pain(1).

I would want an EKG and chest x-ray at a minimum. Heart attacks can present in a myriad of atypical ways and one of the biggest challenges in medicine is figuring out coronary etiology of chest pain versus atypical. This doesn’t even take into account pleuritic chest pain (pain with deep breaths), which can be secondary to a pulmonary embolism. An individual might read the tweet dismissing pleuritic chest pain as a benign etiology, not realizing that even though they might not be having a heart attack, they could have a life threatening pulmonary embolism.

Anyone who is complaining of chest pain and thinks they are having a heart attack needs to go to their local ER. Any physician who deals with chest pain on a daily basis will tell you that.

As physicians, we need to make sure we are using social media tools appropriately, and not over-extending their usage. Twitter has 140 characters, not nearly enough to explain the nuances of chest pain.

We also need to be cognizant that what we say will be treated as golden due to the “MD” after our names and recognize that while social media enables us to do significant good, it can also cause significant harm if we aren’t careful. After some thought, I’ve devised a crude rule for physicians when it comes to giving medical advice via social media to the public.

The rule is: Only give medical advice that you feel comfortable giving to a malpractice lawyer. Would you put it past them to be trolling Twitter?

Wary about the Angelina Jolie effect on breast cancer screening

Why you shouldn’t give medical advice on Twitter
9 comments