There is nothing like a celebrity to call attention to a preventable disease, especially if that disease is cancer. In March 2000, then-Today Show host Katie Couric, whose husband Jay Monahan died of colorectal cancer in 1998, underwent a live colonoscopy to promote uptake of colorectal cancer screening. Over the next 9 months, national colonoscopy utilization rates rose by 20 percent, a phenomenon that researchers dubbed “The Katie Couric effect.”

A decade later, a National Institutes of Health conference on enhancing use and quality of colorectal cancer screening identified few strategies that were as effective as this single celebrity endorsement at increasing appropriate use of screening.

Although many people undoubtedly benefited from the Katie Couric effect, one thing about it troubled me: at the time of her colonoscopy, Couric was only 43 years old. No major medical organization recommends that colorectal cancer screening start before age 50, absent certain risk factors (African American race or a first-degree relative diagnosed with colorectal cancer before age 60).

The Katie Couric effect increased appropriate cancer screening, but probably promoted a lot of inappropriate screening too. For example, a 2005 Veterans Health Administration study found that one-third of fecal occult blood tests performed for colorectal cancer screening purposes were unnecessary, since they were performed in patients who were too young, too severely ill to benefit, or were within 5 years of a negative colonoscopy. Screening colonoscopy is also being performed too early and too often. Though the recommended repeat screening interval after a negative colonoscopy is 10 years, 1 in 4 Medicare patients underwent a repeat colonoscopy within 7 years without a medical indication. This isn’t to say that only patients are responsible for excessive screening – doctors are certainly to blame, too.

Angelina Jolie revealed in a New York Times Op-Ed that she had recently undergone a preventive double mastectomy after learning that she carried the BRCA1 gene, which increases a woman’s lifetime risk for breast and ovarian cancer several-fold. Explaining why she chose to go public with this very personal decision, she wrote:

Cancer is still a word that strikes fear into people’s hearts, producing a deep sense of powerlessness. But today it is possible to find out through a blood test whether you are highly susceptible to breast and ovarian cancer, and then take action. … I choose not to keep my story private because there are many women who do not know that they might be living under the shadow of cancer. It is my hope that they, too, will be able to get gene tested, and that if they have a high risk they, too, will know that they have strong options.

Will the Angelina Jolie effect turn out to be a spike in the rates of women being tested for the mutations in their BRCA genes? If so, it’s likely that many more women will be harmed than helped. BRCA mutations are rare, affecting 2 to 3 per 1000 women. The vast majority of women who develop breast cancer do not carry these mutations and will not benefit from testing. Since the BRCA mutation test is costly, challenging to interpret, and likely to be positive only in women with a very strong family history of breast or ovarian cancer, the U.S. Preventive Services Task Force discourages routine genetic counseling or BRCA testing in most women.

For women without Ashkenazi Jewish heritage, a “very strong family history” generally means a minimum of two affected first-degree relatives, three affected second-degree relatives (cousins don’t count), a relative with bilateral breast cancer, a relative with breast and ovarian cancer, or a male relative with breast cancer. A patient with a family history that suggests a possible BRCA mutation should consult her family physician, complete a validated risk stratification tool, and receive genetic counseling from a trained professional before deciding to undergo testing. (It’s unclear if Jolie’s family history of cancer warranted BRCA testing – although she only mentions her mother in the op-ed, it is possible that other family members had breast or ovarian cancer also.)

Ample evidence indicates that most women overestimate both their personal risk of developing breast cancer and the potential benefits of screening, driven in part by well-intentioned advocacy campaigns to raise “cancer awareness.” A recent New York Times Magazine article reviewed how these efforts can backfire, by exaggerating the modest benefits of screening and downplaying common psychological and physical harms of false positives and overdiagnosis.

This isn’t to say that Jolie was wrong to speak out on behalf of women with BRCA mutations; patients who suffer from rare diseases suffer all the same. What we need to take away from this story – and what I encourage fellow physicians, journalists, and public health professionals to emphasize in communicating with patients about the Angelina Effect – is that screening for hereditary breast and ovarian cancer is beneficial only in very specific situations. Outside of these situations, screening is bad medicine, pure and simple. 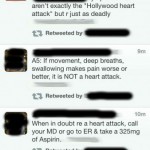