At iMedicalApps we have traditionally expounded on how smart phones can help us with patient care in regards to providing Physician centric tools at bedside.  These range from drug reference tools to various clinical algorithm medical apps.

But there are also non-traditional methods where smartphones enable us to improve patient care at the bedside.  These are subtle, but can be equally or more powerful.

When I was working in the ICU recently, there were two “non-traditional” methods that I utilized my iPhone for to improve the care of my patients.

I was taking care of an adolescent who was still on a ventilator and was having difficulty passing their SBT (spontaneous breathing trial).  It was understandably a terrifying experience for the patient as they were still able to communicate and understand their overall disposition — the patient had plenty of family and nursing staff talking them through this.  Heavily sedating the patient would only hurt their chances of passing the SBT, so we needed them to be as calm as possible without too much sedation.

The staff and family had given the patient a notepad so they could communicate; however, the adolescent was getting agitated since they could not verbalize themselves due to the breathing tube being in place.  Unfortunately, the patient had pathology preventing them from adequately being able to write on a notepad — their words appeared as scribble.

When I came on for my overnight shift, I handed the patient my iPhone.

The words flowed with ease.  We sometimes forget adolescents are more used to taping on a glass screen then writing on a notepad. Also, taping is much easier from a dexterity and muscle effort standpoint then writing on a pad when you’re lying down — especially when you’re connected to a breathing machine. 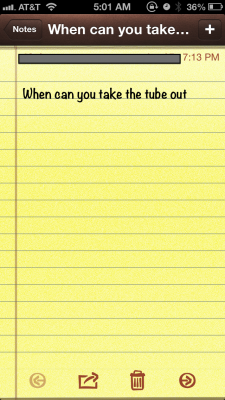 The adolescent wasn’t as agitated knowing they could communicate, and shortly they passed their SBT and their breathing tube came out.

When placing a central line (think large catheter in a large vein) the patient is often heavily sedated or intubated, and is unaware of what is going on. But there are times when the patient is awake, alert, but still in critical condition and a central line needs to be placed for various reasons.

The same night I was having a conversation with my adolescent patient on my iPhone (patient 1), was the same night an alert and orientated patient needed a central line.

The patient told me they had a central line placed many years ago when they were younger, and the procedure made them very anxious and they did not tolerate it well.  I had evaluated the patient earlier, and learned they were a classical music fan. So I asked them if playing classical music would help with their anxiety. I also mentioned that I could play whatever music they wanted on my iPhone.

They gave me a quizzical look, as if I was joking.  I’m a huge fan of Spotify — I encourage my fellow Physicians to get the music streaming app, it’s helped me on more than one occasion with patients during procedures (pandora also works).

The patient told me their favorite classical music album and I started playing it on Spotify.  I put my iPhone next to their ear, and the procedure went smoothly. The patient didn’t get anxious, and handled it extremely well. The patient kept remarking on how they didn’t want any medication for sedation during the procedure because the music alone calmed them down.

Two patients — two different scenarios — and two examples of how my iPhone was used to help their overall medical disposition.  It prevented additional medications from having to be given, and improved their overall trajectory as well.  The most surprising part was no medical apps were used — only the native Notepad app and Spotify.

Fish oil and prostate cancer: Go beyond the headlines

Should intern boot camps be mandatory after medical school?

How an iPhone improved patient care in the ICU
2 comments