“Physicians care more about their pocketbooks than taking care of patients.  They are self-interested and overpaid.  They want to control everything.  They don’t know what life is like in the real world of patients.”

By now, I am sure that physician readers of this blog can feel their blood boiling, for good reason. Why would I, as the principal staff advocate for internal medicine physicians, put such  pernicious, unfair, inaccurate quotes in my blog?

You would be right to be angry at me—if I believed any of the above, but I don’t.  I work for doctors because I believe in doctors.  I believe that with very few exceptions, physicians  are motivated by a compassionate commitment to applying their skills and training to improve  the health of their patients and the American people.  And when it comes to physician advocacy in public policy arena, I believe that the vast majority of them take stances that they believe to be in the best interests of patient care, even though they may not agree among themselves on the best course of action.

So why would I start this article with made-up quotes (although you can find many people who say the same) that cast aspersions on the medical profession?  To make the point that broadly labeling a profession or occupation as consisting of people who are unethical, self-interested, controlling, over-paid, and out-of-touch is simply wrong—on the facts, but also by any sense of objectivity and fairness.  Casting aspersions, after all, means making “a false or misleading charge meant to harm someone’s reputation, cast aspersions on her integrity”  or “the act of making such a charge: defamation.”

But there is one group of our fellow Americans—almost two million of them, by the way—that are regularly defamed in the political arena: people who work for the federal government.  People I know, people who are my friends, people who I interact with every day on behalf of the American College of Physicians,  people that many of you know—most of whom live and work outside of Washington, DC.  (Very early in my career, I was one of them, employed by a federal agency that dispensed higher education grants, and before then, as an unpaid intern for a member of Congress).

Here is what I know about them, and maybe you don’t, or maybe you do.  Most of them work extraordinarily long hours, longer than many I know in the private sector.  They haven’t had a raise in three years yet their productivity would put many private sector employees to shame.

Most are motivated by a desire to serve the public—that is why they chose careers in public service, rather than Wall Street.  Many are highly educated, but many are also working class people who are doing the unseen work of keeping things running.  Many have advanced degrees and years of experience that would have allowed them to cash in long ago to make more money in the private sector, but they don’t, because they have a higher calling than that.   Many of them have chosen careers that potentially put them in harm’s way—Soldiers, Sailors, Airmen, Marines;  and people like my sister, a foreign service officer who represents U.S. interests in other countries; and FBI agents, Capitol Hill and Park Service police, federal marshals, and many more who work in law enforcement.

Most federal employees are crammed into small offices and cubicles that from all appearances haven’t been upgraded since the 1950s.  Instead of state-of-the art technologies, most are stuck with out-of-date computers and cell phones (past generation Blackberries, no IPhones for them!).  They are at the whim of whatever Congress decides to do, or not do, to enact a federal budget, with the seemingly constant risk of government shut-downs (read, lay-offs), and now, sequestration pay cuts.  They expected to do their jobs even as travel budgets are slashed, hiring freezes imposed, and technology upgrades cancelled because of funding cuts.

They are people like my friends in the Government Accountability Office, whose jobs are to investigate federal spending programs (on behalf of Congress) to ensure that the money is spent wisely and effectively.   They are people who make sure all of those millions of Medicare and Social Security checks go out every week.   They are people like my friend at Treasury who tracks money laundering by terrorists and drug kingpins.  They are the federal agency employees whose jobs are to turn laws passed by Congress into workable regulations and policies—just think of all the employees of the Center for Medicare and Medicaid Services who are working over-time to try to implement the Affordable Care Act on time and effectively, to ensure that it meets its goal of expanding access to affordable coverage.  They didn’t write the law, but they have to make it work.

They are people like my brother-in-law, who works for probably the most loathed agency, the IRS—but without which, we wouldn’t have the resources required to do everything the federal government does, from keeping the elderly out of poverty to keeping us safe to providing financial assistance to the poor to paying for physicians’ graduate medical education, whatever we the public have asked the federal government to do through laws duly enacted by the Congress we elect.   They are people like a former ACP colleague of mine and long-term friend who now works as a Republican staffer on Capitol Hill, assigned with such seemingly insurmountable jobs as figuring out a way to eliminate Medicare’s SGR formula and create new and more effective payment systems!

They are people like the ACP physician members who work in CMS and other federal agencies, guiding research on health care disparities and access (Carolyn Clancy, MD who is the outgoing director, Agency for Healthcare Research and Quality) and federal funding to improve health care payment and delivery systems (Rich Baron, MD, who left private practice to work in CMS’s Center for Medicare and Medicaid Innovation and is now leaving to become CEO of the American Board of Internal Medicine).  People like former CMS administrator (and pediatrician) Don Berwick, who brought a refreshing and passionate voice to the agency on always putting patients first.  This is how Dr. Berwick describes his CMS colleagues:

“The time at CMS has been a privilege. I got the chance to work with thousands of career public servants, and to learn how much these people do for us all, unsung and too often unappreciated. These are the people who translate laws into regulations and regulations into deeds. In CMS these are the people who keep the lights on – they see that providers get paid, they protect the public trust, they help the most vulnerable people in America, and make sure that they get the care they need.”

But it is not just the politicians who castigate federal employees: polls show that much of the public views them as being “lazy, overpaid, and incompetent, among other adjectives.”  A recent poll even found that a majority consider federal employees to be “corrupt” even though objective studies show that the public sector in the United States is rated as among the “cleanest” (least corrupt) in the world.  And, to the extent that there is a risk of public sector corruption in the U.S, it is more likely to be in state governments than the federal government.

And now, because of Congress’ failure to reach a thoughtful deficit reduction package, we are stuck with across-the-board cuts that will furlough (mandatory unpaid time off) as many as a million federal employees—the equivalent of a 20% pay cut for those affected. Physicians rightly are crying foul over a scheduled 20% cut in Medicare doctor pay, but where is their sympathy for federal employees taking a comparable hit?

It is one thing to criticize federal government policies that you don’t agree with, to try to get those policies changed, and to elect different people to office—this is the essence of democracy.  And for sure, the partisan gridlock in Washington is a sound reason to feel disconnected, even disgusted by the state of politics and governance today.  But it is another thing to defame the hard-working, conscientious, honest, and public-spirited federal employees who, after all, are working for us. 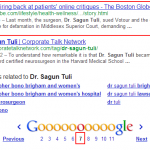 Why physicians should sympathize with federal employees
7 comments