The Boston Globe recently had a front page story on how a neurosurgeon sued a patient’s husband for a blog critical of the physician.

According to the story, the patient underwent a complicated back operation as a result of her bone cancer. She tragically had a stroke post-operatively, and that’s where the situation between the family and doctor deteriorated. On the advice of his psychiatrist, the patient’s husband wrote a blog post describing his ordeal (it has since been removed).

The neurosurgeon then sued the patient’s husband for $100,000 claiming the blog did damage to her career. According to the doctor’s lawyer, one reason for the lawsuit was that the “blog popped up on the first page of Google search results.”

Although this post isn’t about the patient-physician aspects of the case, I do want to emphasize that the neurosurgeon clearly should have met with the patient’s husband, which could have avoided this situation altogether. In fact, the whole adversarial nature of the malpractice process is a topic that I’ve written about before, and it drives a wedge between doctors and patients. When it comes to bad outcomes, we need a non-adversarial, transparent process that promotes open communication between doctors and patients.

With that said, let’s see how this news the story affected the doctor’s online presence.

As I wrote in my book on online physician reputation, lawsuits are the last answer when it comes to responding to online posts. That’s because they take time, money, and are only rarely successful. More commonly, doctors suing patients leads to extensive media coverage, which can make a bad online situation even worse. Bryan Vartabedian covered this story recently, citing the Streisand effect.

So I was mildly surprised when I Googled this neurosurgeon’s name: 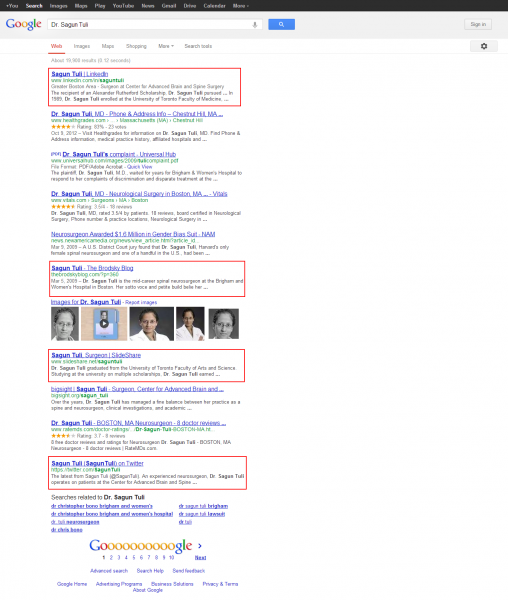 The Globe story is nowhere to be found on the first page. In fact, you have to scroll to page 7 of the search engine results to find it: 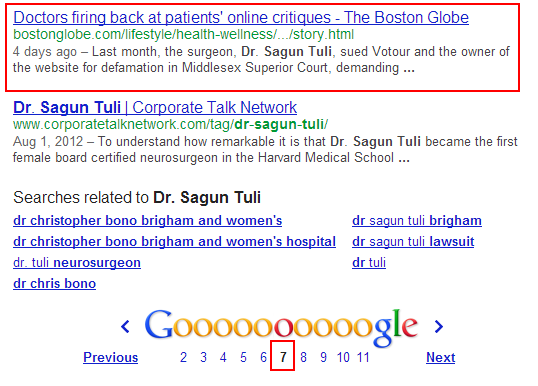 What shows up instead? The neurosurgeon’s social media presences. A LinkedIn profile, which is the first result. Also on the first page is her Twitter and SlideShare profile, along with an entry about her on the Brodsky Blog. In fact, if you scroll through pages of search results, you will see she has a huge digital footprint, including .com and .net websites, Flicker, Quora, Tumblr. and about.me among others. It is very likely she hired an reputation management firm to construct such a coordinated online presence.

Now let’s compare this to a famous case of a neurologist who sued a patient’s son for a negative online review. 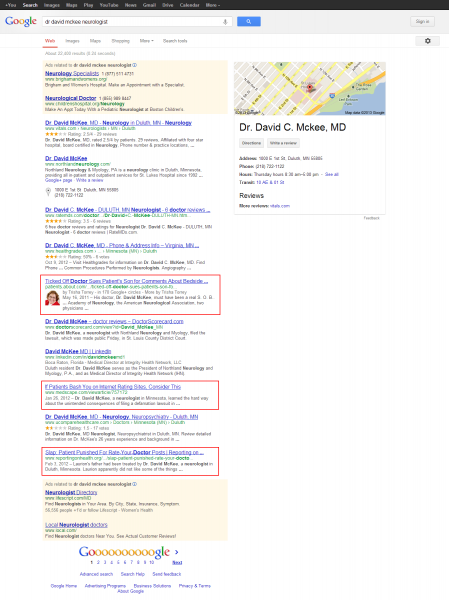 On the first page of his Google results, there are already 3 mentions pertaining to that case. He does have a social media presence, including profiles on LinkedIn and Quora, but the amount of such proactive content pales in comparison to the media coverage surrounding his lawsuit. Granted, this story garnered national media attention, while the first case was confined to the Boston area.

But there are interesting observations from each doctor’s online presence.

In the first case, the physician insulated herself against a front page newspaper story with a much stronger, proactive, online presence comprised of various social media profiles.

In the second case, which I had been following since its inception several years ago, the doctor allowed himself to be defined by critical news stories, and then had to reactively build his digital footprint, with mixed final results.

It’s inevitable that doctors will eventually have something critical written about them. It could be a newspaper or television story, or more likely, a negative patient review. Generating content and claiming social media profiles is an effective way to push down the visibility of such comments and articles that can hurt a doctor’s online reputation.

But the ultimate lesson is one in prevention. Doctors should always keep the lines of communication open with patients, listen to their reviews, and use their comments to constructively improve their practice.

And above all, don’t sue patients in the first place.

Note: The physician names have been purposely omitted in the text, so that this article won’t appear in a Google search for their names.

The simple act of truth in the face of incurable cancer