The first time I saw someone die was when I volunteered in the ER as an undergraduate student.

That day I was helping in the trauma bay, and my job was to quickly run STAT or urgent blood specimens to the lab.

The year was 1994. It was winter time, and the tension of the people sitting in the waiting room was palpable to me every time I would go through those automatic double doors to carry my vials of labeled samples to the basement lab in my gloved hands.

People would look at me every time as if I had the power to let them in quicker. I was told to wear scrubs and eye protection, as I was around blood and pus quite a bit, and I had a picture ID with a hospital logo that simply said Volunteer on it. But people looking up at me could not read the word volunteer as I hurried in and out: pausing for a moment from playing with their anxious hands or comforting a crying child with some hope I could help.

That’s when the ambulance pulled in with a young man on a stretcher.

The person they brought in was pronounced dead shortly after arrival at the trauma bay. A young motorcycle driver had a head-on collision with a pickup truck.

I was in no way involved with the actual medical care of this person. Just heard someone pronounce the time of death. A first for me. Then hearing people going through his wallet to find information on who he was so that they could contact their emergency contact person.

All I remember is that there was so much commotion in the room and tens of people running in and out, looking preoccupied with their immediate task at hand: some cleaning him up and others wiping the floors and changing the sheets.

I did not know what to do. Was a moment of silence in order? Do we say a prayer for him? I remember my heart beating in my stomach. I wanted time to stop somehow. Do I look at him out of respect, or do I look away out of respect?

In my innocent mind, I was desperately yearning for an actual ceremonial pause.

There were none. If anything, I could hear the nurses and respiratory therapists giggling about something unrelated.

Laughing? Next to a dead person. What was that all about? Is that OK? Is it respectful?

Then in my young brain, I started rationalizing the whole situation:

“They see this all the time. Of course, they need to move on to the next thing. Otherwise, they could not last one more shift. They are doing the best they can, moving on with their life to the next patient being wheeled into the next trauma bay.”

That was my formal exposure to a medical system that does nothing to process the deaths that the health care workers witness on a regular basis.

Do you remember your first hospital death?

Was there any sort of debriefing happening for you?

Soon after this, I saw our chaplain come to the ER, loving, patient, and kind, waiting for the family members to arrive.

I was wondering: “Is the chaplain going to come and talk to the staff? Will he check in with me?”

I felt relieved by the idea: “Maybe I can say or hear something meaningful at that time that would feel important and significant.”

But he didn’t. And no one from the medical team seemed to be needing to speak with the chaplain, either. I could hear a very loud cry followed by muffled cries that seemed to go on for a bit.

The family was notified, it seemed.

Years passed, and I noticed I was strongly drawn to caring for people near the end of their lives. So, after an internal medicine residency, it made sense to me to pursue hospice and palliative care medicine as a subspecialty. From 2012 until 2022, my focus practice was around inpatient services.

While our team included excellent social workers and chaplaincy, and we always had a pre and post-huddle, I am not quite sure if I ever actually processed any of the deaths I’ve witnessed in a formal and structured way.

Some were harder than others, of course.

Due to COVID’s strict visitor policy, I remember we were talking to the family on the phone, describing the patient’s last minutes of life in detail.

My heart would feel so heavy at times I couldn’t even take a deep breath.

People would tell me: “Wow. What you do is so hard. I can’t remember you do this every day.”

I would simply smile. It was my pleasure to hold space for people during those times.

But who was holding space for me?

I am a student of Eckhart Tolle’s mindfulness teachings and have appreciated the value of stillness meditation for years.

While I meditate regularly, I remember having lived in Japan and seeing peaceful, quiet Zen monks at their monasteries. With all that I went through with COVID, I wondered if practicing their type of meditation could get me to that state of what westerners think of as being Zen.

I learned that the opposite was true for me.

The first time I decided to go to a Zen temple to practice Zazen meditation, I did not know what to expect: 45 minutes of sitting in a fixed lotus position on stacked cushions, with your eyes softly gazing forward and not moving any part of your body. Let your mind go where it wants to but bring your breath back to the here and now.

Could I sit absolutely still for 45 minutes straight? Not moving a muscle? This was not guided meditation after a yoga session.

Minutes after I got settled on my cushion in the 100-plus-year-old temple in Honolulu, I started crying. Without making a sound, tears rushed down my face without trying to fight them back. The entire session: I cried non-stop. What was happening in my mind is that I remembered every single death or grieving family I held space for in my career as a physician.

Ten years of holding space for others: opening up like the active Volcano on the Hawaiian islands.

I wrote a piece on holding space on KevinMD that was shared 1000s of times and was shared by the Academy of Hospice and Palliative Medicine social media. The zen meditation got me thinking:

Who holds space for you when you witness death and dying in the hospital?

How do you honor the dying while processing your own grief? Day in and day out.

Now I have a regular meditation practice that lets my mind go where it wants to go, and I am learning that if I have no self-absorbed thoughts, my own grief comes up for me.

So I hold space for myself. In solitude. In meditation.

So that I can hold space for those around me. One more day. One more death. 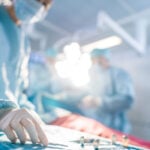 More by Faryal Michaud, DO