I just wanted to tell you that I had a wonderful patient as a consult today. She had a pretty bad prognosis and was a recently diagnosed hepatobiliary cancer patient. Pretty aggressive disease with wild metastasis. From her time of diagnosis to my consult was less than two weeks. But her cancer was advancing at a remarkable pace, and the oncologist was recommending no further chemotherapy if she remained this ill.

She had lived a pretty phenomenal life. Her daughter on the phone was reminiscing of the time the two of them went sky diving, and when her mom was filling out her paternal permission slip, she just stood there in disbelief that her mom would let her jump. The daughter didn’t jump. Mom did. Then mom asked if she could do it again since they had already paid for two. Yep. That’s the kind of mom she was.
No lesson in that one. Just pure sweetness to hear people love life with that intensity. And, of course, the intensity of the love of the daughter for her mom. To a fault.

So much so that the mother was not looking forward to being discharged home. All the healthy foods the daughter made her eat were not something to look forward to. She told me she was dreading it. My patient was constantly nauseous with terrible abdominal pain from cancer, and the oncologist had left the door open.

“If she ate a little more, if she could get a little bit more strength, they could consider chemotherapy.”

If you are a family member of someone suffering from a type of cancer that keeps them from keeping food down, please don’t force them to eat.

Food has so much association with love in our culture. In some families, more than others. I have been trying to be intentional on having treats for times of celebrations and never in times of sadness and emotional struggles just to “cheer people up.”

I’m not a “hey, you had a bad day, you deserve a treat” kind of mom. But I know many people who try to feed people’s sadness. Their own and that of others, too. They even call the dopamine hit: comfort food. Something that puts you in a soft glucose-induced coma.

Cancer is a little like that. People try to feed it. Giving comfort food to the patient who sees food as anything except comfort. To make the patient just a little stronger. Strong enough for more chemo.

And trust me, I’d be the one to sign up for chemo if it gave me more time. But I wouldn’t take more bites if I cannot stomach food, just so that I could take chemo and throw up again and end up in the hospital.

Do you know who doesn’t take third-line chemo and experimental trial drugs for cancer? Oncology nurses. They know what’s next.

There is so much love around the end of life. So much sacrifice. I know the daughter thought she was sacrificing her own life and family, spending time with her mother preparing painfully intricate recipes with expensive Whole Food organic foods.

But the patient was sacrificing so much more. Not only was she dying, but she was also offering to accept all the help from her daughter. One more bite when you cannot stomach anything. When you know it’s coming right back up. One more bite, so you could handle more chemo.

Because, “Mom, you are a fighter, you are going to fight this.”

I do not like the fighting metaphor about cancer. It’s not a battle. You have a parasite that is eating you from the inside. You kill your insides while passively taking chemo to kill cancer. Sometimes you make it alive, but most of the time, you die along with it.

When you tell patients they are fighters, you are telling them that when they approach death, they are “losing” the fight.

We are all going to die. We will all lose the fight.

Losing the fight, while forcing themselves to take one more bite of the food that doesn’t taste good, so that they can take more chemotherapy only so you can be happy they tried.

All the daughters are fighting for their fighter moms. So they won’t lose a war they cannot win.

Sometimes, the best we can do is to understand the suffering, hold their hands and just say, “I know it’s hard. I know you cannot eat, and that is OK. You don’t have to try for me. I love you. You don’t need to fight for me.”

Once in a great while, I see a daughter like that, and I hope that’s the kind of daughter I will be when it’s time for my mother to leave the living.

Death is never easy but allowing our loved ones the permission to leave when the burden of suffering is too heavy creates a space of grace and compassion that can only come from the purest love and intentional depths.

I wish that from my daughters for me, too.

Faryal Michaud is a palliative care physician and can be reached at Write Your Last Chapter.

Anger toward the unvaccinated will only cause more harm [PODCAST] 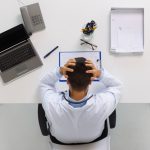 More by Faryal Michaud, DO

The price of love is loss. But still we pay.
1 comments