Back on the internet, you are looking for something to make you angry. It’s a habit you picked up as a researcher, stuck in your lab until sunset, walking home to those empty walls. It’s one you’ve kept as a medical student.

It’s always the most belligerent takes that ignite you. The ones that leap to the front line, waving old middle school science like it’s pure, unshifting truth. It needles you. Almost sickens you, how it spreads. But it feels like they’re begging for your help. To fix that sickness.

There’s the time you sent article after article of scientific backing to the man who insisted trans experiences went against science. You remember the onslaught of people sticking needles under his comment on a post about J.K. Rowling. Grad students with mountains of articles and acronyms. Some people came with patience, others with frustration, fresh-cooked over a long week, long year. He was an old man. He told you his wife worked with intersex children, though he didn’t know that word. You thought you were reaching an understanding with him before he deleted his post and disappeared.

You wonder if he took your words with him. You wonder the same about the man on Twitter. The one with the faceless green profile who you tried to convince it was safer to wear a mask than not. He wouldn’t listen to you no matter how many graphs you showed them. “I’m a good person.” He insisted instead. “You can’t tell me I’m not a good person.”

You are far away from these people. You feel you are stretching yourself into distant cities and towns. Yet to stand strong, add research to your rebuttal and fortify your knowledge with the assurance of fact, it almost holds you together. To know what you believe, solid among a dissonant chorus of hurricane winds that threatens to tear you — molecule from molecule. Loud, while the voices spill in every direction. The world outside you is chaos. The more firmly you plant yourself, the more violently it rips past your ears.

Senator Jeanne Shaheen, head of the NDAA, penned a tweet assuring the public that they would find a solution to Havana Syndrome. You remember Havana Syndrome. A smattering of stories, neurological attacks on U.S. operatives from Russian, Cuban and Chinese intelligence. When you first heard of it, microwave lasers shot across the world just to tire out some low-level U.S. military and government officials, you laughed.

The world has gone insane again, you think. Did we forget the virus killing millions before our eyes? Are we passing legislature for the hundred people falling bedridden, a hundred inconsistent symptoms as our only scientific backing?

It’s a political play. It’s a farce. You can see that.

How do you help a patient you know is wrong?

They have to come back.

How do you make them come back?

You’re flipping through Dr. Robert Aronowitz’s Making Sense of Illness, which reminds you diseases don’t spring from their viruses with full names and meanings. Even with the guidance of science, our diagnoses rest on complex social webs. You read about chronic fatigue syndrome. The way doctors attributed it to polio, EBV, overwork, stress and hysteria. You wonder whose fault it is. How you could solve it.

You find yourself scrolling through forums on long COVID. People huddle around the electric fireplace, angry, tired. They still can’t taste. They can’t look out a window and love the colors. Shadow of a virus is painted across their bodies. The sick flock follows its patterns. Sick in the same way. Sick in a hundred different ways.

Do you believe them?

Doctors have their doubts. Some patients come into clinic with no antibodies. No sign of previous infection. Doctors whisper that online worlds breed false diagnoses. Long COVID activists take to the streets of Manhattan. Still sick. You read about suicides. No answers.

You realize you are far away from these people. Watching lives through slide shows of ten-minute intervals. Pictures under the same clinical lighting. One day, you will have to decide what they need, or deserve.

The last time you saw him was your grandfather’s funeral.

You flip through the pictures on Facebook. Another slideshow under blue light.

He was often smiling.

He was often sick.

If you showed his picture to someone without a face, what would they tell you? That he was destined for it? That it was his fault?

You’re outside now. And you and your friend cut like explorers through the woods between two white golf courses.

He tells the story of crossing a frozen river. How it cracked beneath his feet. How it cut between highways, back home, in Moscow. And you wonder how much of his family lives in the blue light slideshow. How often he flips through.

Online, Ukrainians post memes foreshadowing destruction. Laughing puffs of breath, clouds burnt into the sky for the world to see, for just a moment: we’re trapped. They have decided we are the next to be torn apart.

And far away, a few people fall sick. Whose fault? A weapon or a pathogen? Maybe from the images shouting in their eyes.

A new war is always coming; bodies open from the stress. Taken ahold of. Caught in the tide, diagnosis.

What grips your head in a vice these days? What twists your brain like a mop?

Fatigue. Exhaustion. A virus in the air.

Do you see it floating around you? Pouring out the screens, out the mouths of people you trust. Do you need them?

Viruses, voices in your room. Propaganda. Assurance that we need to keep moving. Keep fighting.

You need a moment. Just one moment, to rest. Back on the internet, you are looking for something to make you angry.

Judson Ellis is a medical student.

A patient hit me: Why I say anti-assault prayers

What clinicians need to know about psychedelic medicine [PODCAST] 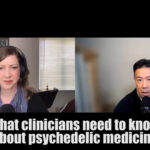 On the internet, you are looking for something to make you angry
1 comments