Dogs have been part of my extended family for most of my sixty-plus years. With a dog comes poop.

It doesn’t really matter on a farm, but in the city, there is an expectation, a social contract of sorts. In the public parks and boulevards, the dog owner is expected to scoop the poop.

While some dog walkers dutifully pick up their dog’s poop, others don’t bother, and before I know it, I’ve stepped in it. Squish! Yuk! Stink!

And then there are those owners who bag the poop, but leave the little bag at the side of the path. Who are they leaving it for? Their mother? The great poop scooper who will descend from the heavens? Or maybe someone like me who sometimes gathers it up despite my frustration with their negligence?

The social contract has been credited to 16th century English philosophers Locke and Hobbs, who greatly influenced our U.S. founding fathers. The contract outlines the rights and freedoms of the individuals who follow the laws or rules of society on the condition that everyone else does too, and all benefit from a safe and civil society. Picking up dog poop makes for cleaner public spaces; it is part of the social contract of pet ownership.

But alas, not everyone follows the rules, especially not here in the U.S., where rights and freedoms garner a lot of attention, now more than ever, and seemingly louder than ever. After all the American dream has been life, liberty, and the pursuit of happiness. However, for too many centuries the realities of whose blood and whose sweat were spilled in the founding of that dream have been ignored. The underbelly of the social contract has been exposed as it unravels. This is a time of tremendous chaos, which brings my attention to pandemic behaviors and our Omicron fiasco.

Medicine is also based on a social contract: Physicians promise to care for the patient, keeping the patient’s best interests at heart and gaining the patient’s trust, respect, and fair remuneration. Paul Starr described the social contract in his 1980s book, The Social Transformation of American Medicine, and explored how the industrialization of medicine might challenge that physician-patient contract. However, among others, medical educators Cruess and Cruess have described for years that medicine’s social contract is a key component of professionalism: the obligations the physician agrees to uphold for the patients s/he serves.

With the pandemic, this is being severely tested, especially with Omicron. I am not working in the hospital or emergency department, so I don’t face the weariness and frustration from the heavy workloads precipitated by patients who refuse to take the vaccines. However, I hear about it from colleagues and teach medical students who wonder about the profession they are planning to join. I’ve offered vaccines to many patients who refuse them. There are growing numbers of blogs, op-eds, and social media posts describing health care workers’ fury and exhaustion.

Some populations distrust medicine and science for a good reason: Blacks experimented on without their awareness or permission in Tuskegee and other unethical scientific trials. But for many others, refusal to mask and vaccinate is based on the lies spread by political agendas — freedom of speech, freedom to mask or not, control over what is put in my body. And yet, if they become sick, they will go to the hospital and expect care. This is in conflict with the social contract, in which we act in the interest of the greater good, for the benefit of all.

It is hard to understand and communicate the uncertainty that comes with evolving science, the changing recommendations as we learn more, the vaccine that didn’t do all that was initially promised. It has become even harder with the erosion of trust and civility.

Back to the poop. It stinks. It’s not pleasant to slip and slide in, and even today, I saw a bag hanging from a tree! Was that owner practicing his pitch? Trying to hit a squirrel? Or did she toss it to the heavens for God to catch? Only God knows!

Perhaps our way forward in these challenging times is to start small. Scoop up your dog poop and put the bag in the trash can. And if you are feeling kind, pick up the bag full of poop sitting at the side of the walking path. And please cover your nose when you are wearing a mask. Of course, wear a mask. Don’t forget to get online and order the COVID tests for your household. And please get your vaccines and booster.

Autism spectrum disorder and the masks we wear [PODCAST] 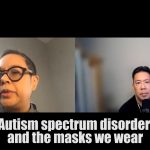