According to the WHO, 10 to 20 percent of COVID-19 patients experience lingering symptoms for several months following infection. What we know as long COVID is now termed post-COVID condition as of October 6. Post COVID-19 condition occurs in individuals with a history of probable or confirmed SARS-CoV-2 infection, usually three months from the onset of COVID-19, with symptoms that last for at least two months and cannot be explained by an alternative diagnosis.

I spoke with a friend from France who is a long hauler and has been suffering from symptoms since last year. Her story is one of the millions.

I was diagnosed with COVID on April 8, 2020. Then did another test a month later, still tested positive. Some symptoms faded away, but the shortness of breath and sometimes even slight struggles to breathe and tiredness haven’t. I developed antibodies, but no one knows why I still have breathing issues. And there’s nothing on lung imaging. I heard that there are other cases like mine, long COVID they call it, but it doesn’t explain what’s going on with us.

What symptoms are you feeling these days?

“It’s mostly fatigue, dizziness, tingling sensation in my fingers and feet. Trembling of the eyes also. I did a few tests and it comes out that it’s due to hyperventilation. And this hyperventilation is seen more and more in long COVID cases.

What do you mean by trembling eyes?

“By trembling eyes, I mean that very often, my left eye has spasms. You know, it’s the symptom that often appears due to lack of magnesium or intense tiredness. And no matter how long I take magnesium pills, it doesn’t stop. Now, I take it as a sign that I’m just tired. But at work, it was bothering me a lot because I used to work in front of a computer, mostly reading. And when these spasms happen often, it’s hard to focus. It’s not painful; it’s just extremely bothering.

But often, when I go run errands, after a while I get so tired checking the shelves and the products that it becomes hard to focus my eyes, and I feel a strong urge to get out of the store. Like there was too much information for my eyes to process. Very tiring for me …”

What did your doctors tell you?

“My pulmonologist was saying, “It’s normal, it’s COVID,” at the beginning. Then, she started saying, “it’s normal, it’s long COVID,” and started telling me that she was having the same issues as she got it too, but she had no other answer. She just said that I need to rest.

But, I was working two jobs at the time and couldn’t offer myself the luxury to rest so much. So, I just kept on living, being fully energized sometimes, and fully flat the following days. It lasted for months.

Then, my family doctor told me, “you must exercise and do cardio as often as possible. Each time you feel like you’re slipping into tiredness episodes, go rope skipping. Mornings, lunch breaks, evenings. Make your cardio work for you.” I tried until I almost fainted one day. Thank God I was with my girlfriend who is a physical trainer for people with sickness or disabilities. So she helped me out a lot. But, I lost motivation when I got the feeling that nothing was helping.”

What happened after? Did you continue working?

“I stopped working. I’m a rather ambitious person. I love thinking, analyzing, debating, working. And with the brain fog, I had the feeling of losing myself and not being fit anymore for the kind of jobs I worked so hard to get after going to school.

And my friends couldn’t understand because you don’t see the tiredness or the effort it costs me when I go out. And constantly complaining about being tired when it doesn’t show was hard for them to understand. So, it made me feel depressed at some point. No answer from the medical world, no help from my close circle, and no clue what kind of job I can aim for after finishing my internships. No clue how my future will look like, as I have little hope things would change in the near future.”

What are a few things you want the public to know about COVID?

“The positive in all this is that it helped me figure out who I can rely on and define limits to what I can do. I’m often frustrated, but I remain optimistic. And if nothing helps, then fine. It’s hard to be OK with it because I feel that I’m losing on so much of my dreams despite being so close to reaching them, but at least I’m alive.

I hope my story will resonate with others because many people truly don’t realize how hard we long haulers have it. COVID isn’t just about old people ending up in intensive care. It’s also about much younger people having long-lasting effects. Fatigue sounds like a soft non-painful negative effect, but in the long term, it affects the body, the mind, and can lead to broken dreams and depression. It is serious.”

What are you hoping changes about the conversation on long COVID?

“What I wish was done for people in my case was to have maybe a strategy to channel information for health professionals. I had to go from one doctor to another for many months and had to do some research myself. I don’t blame them for not knowing, as it’s still very new, but this entire process was mentally and physically exhausting. Plus, there are only a few programs for long-haul COVID research and care in France was booked. Too many patients and too few funds or doctors to work on them. They were saying this themselves when I managed to talk to some. Not enough space despite very high demand.

Most people aren’t interested in my experience and don’t take it seriously.

The doctor who made me run the hyperventilation test told me that they were seeing an increasing number of patients in the same case. That it’s becoming a serious societal problem as an increasing amount of patients are becoming less productive, highly affected, debilitated, and eventually depressed. In France, we have a rather good social security system, but such an increase in long COVID will be very costly too.”

How to recover from a bad electronic health records implementation [PODCAST] 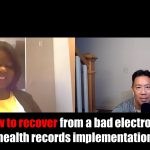 "Call the family. Let them know she passed away."