My patient is a brilliant, 30-something-year-old highly educated woman with type 1 diabetes. I’ve known her for many years, since she was a teenager.  She is sweet and fun, even though she can be fierce and fiery at times. She has type 1 diabetes.

She has been living with this life-altering, life-threatening disease for many years. Even as a child, she always took charge of her life and consistently maintained her blood sugar at an excellent level. Things weren’t as complicated ten years ago: there were a few kinds of insulin, but mostly what she needed were two types of insulin, long-acting and short-acting, and there were the blood sugar testing devices. They were either on the “approved” list or on the “not-approved” list by insurers (based on the deals various insurers have with drug manufacturers). We mostly complied and got her the supplies she needed from the “approved list,” which was the end of the story.

As medical technology grew more and more advanced and complex, my patient’s needs also changed. It turned out that she didn’t have to live with the inconvenience of four or more insulin shots a day- she learned that there were insulin pumps.  Then, she learned that instead of checking her blood sugar ten to twenty times a day, she could use a sensor.

Now, the insurance companies did not take it kindly to the technological progress. It was already expensive for them to have a type 1 diabetic on their roster to start with, but with all the devices that would make a diabetic’s life easier and more pleasant, the cost of care would turn literally astronomical.

The insurers couldn’t prevent people with diabetes from joining their programs (it became illegal to discriminate patient enrollment based on pre-existing conditions), and they also couldn’t prevent patients from asking for the latest technology and the latest and best kind of insulin in caring for their condition.  So the solution was beyond clever: make it difficult for the physicians to prescribe it. Put up barriers every time a prescription for anything that was on the “non-approved” list showed up. Make the doctor get a “pre-authorization.”

What I am trying to say here, is that, for the patient to have their ever-increasing needs met, the doctor has to jump through innumerable hoops, spending hours literally filling out forms and fielding phone calls, often on hold for tens of minutes, if not full hours, at a time.

There are two possibilities here: either the doctor has office staff, in which case, well-trained staff can take care of most steps (but please, since we live in a capitalist society where nothing is free, keep in mind who the bearer of the cost of the office staff is), or, like in my case, the doctor has no office staff (by choice) and she/he has to do everything herself.

I know how much I want my patient to have the latest and the best of everything- but how do I justify to myself the tremendous burden that her needs are imposing on my time? This most valuable resource, time- that once gone, nothing will ever replace. Time spent on administrative tasks means time away from my family, from my writing, from my other patients who need me.

What is the way out of this mystery? We, the empaths, have been put in the middle of the war happening between patients and their insurers. We have agreed to take on this burden, which ended up with us burned out, dehumanized, and often vilified by the public, precisely because we want to help and want to be everything to everybody.

Why did we agree to this? I guess we were never explicitly asked.

Slowly, insidiously, the curse and obscenity of “cost-saving” has infiltrated our professional lives and has turned us into the “bad guys.”

How do I stop myself from feeling resentment at the demands placed on me by the system?

I thought I found a solution (at the advice of one of my mentor, Pamela Wible) in asking patients to be temporary, honorary office staff members and make all the calls and take care of all the paperwork, be in charge again of their own care, be involved, and see first hand the price that had to be paid for their ever-increasing needs.

This worked for a while until the patient said she was “fed up” with the system and asked me to go on with the next steps.

When I told her that there’s a price for my administrative time, it turned out she didn’t want to pay and went back to doing everything herself, irritated and disappointed.

I do have a lot of compassion for people who are not well, and I am particularly familiar with type 1 diabetes, who have a chronic condition. The way I see it, that a system’s problem has been dumped on individuals. The patient has to bear the burden of their condition alone, in isolation, from a very unresourced place. The doctor must bear the burden of all the administrative, time-consuming, meaningless tasks that will save the insurance company a buck or two. When doctors revolt and refuses to give their time and energy for free, they are accused of being money-hungry, greedy or plain heartless.

A huge societal flaw has been perversely turned into emotionally manipulating the people with the biggest hearts into giving away their resources for free. In staying silent, in continuing to buy into the corrupt, rotten, nefarious “medical insurance” system, we all approve of the ways the people with the biggest medical needs (that they did not inflict upon themselves) and the kindest and brightest of us are treated.

No wonder patients detest our health care system, and doctors are leaving medicine in droves.

Corina Fratila is an endocrinologist.

In memory of Bernard Lown

We must address glaring disparities in treatment [PODCAST] 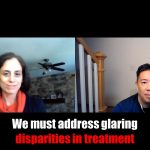 No wonder patients detest our health care system, and doctors are leaving medicine in droves
5 comments