Being an internist, the day is filled with problem-solving.  The problems are often not straightforward and require thinking, rethinking, reevaluating, and reading up and researching before the problem can be solved.  However, when a sixth sense, an intuition kicks in that warns us that something needs to be addressed urgently even when we cannot specify or articulate why.

Once I had a patient come in for shortness of breath that is not relieved by her albuterol inhaler. She states she is anxious by nature, and perhaps these episodes are associated with her anxiety. She is young, healthy, not on any prescription medications. In the office, an EKG is negative for any pathology. Chest and cardiac exam are normal. No risk factors for blood clots are identified. I plug in her stats in a risk calculator designed for physicians to stratify risk for blood clots, and it concludes that she is low risk. However, my intuition kicks in, and it directs me to the conclusion that she needs a CT scan to rule out a clot. Perhaps this could all be chalked up to anxiety, but something makes me think otherwise. I call the ED, and the ED physician is not impressed as no solid data is warranting a CT scan. I persist, and they have her come to the ED and get it checked. CT scan shows a blood clot in her lungs, which is potentially life-threatening if not treated emergently. I wonder what made me do that, and I cannot give a solid answer to this.

Another patient comes in and gives a vague history of feeling fatigued. You run a blood panel, all workup is negative, but something nags you, and your request a CT scan that shows a recurrence of her cancer 20 years old.

In both instances, had I followed an evidence-based algorithm, I would have sent the patient’s home with an alternate diagnosis with a plausible explanation and documentation to support it. But something during the office encounter and how they described their symptoms, the way they looked triggered an instinctive reaction rather than an evidence-based one.

What is this phenomenon? That forewarns us? That makes us think intuitively.

Malcolm Gladwell talks about this in his book Blink: the art of thinking without thinking.

He relates a story about an ancient art relic The Kouros — an archaic Greek statue of a young man bought by the Getty museum for millions. A group of scientists vouched it was authentic — even took a core sample and analyzed its properties.  Despite all the evidence vouching for its authenticity, another expert panel of historians have an ‘’intuitive repulsion’’ to the statue and insist that it is a fake. This is later proven to be true. 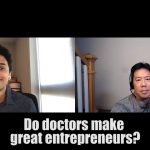 As a busy primary care doctor, here is what I am facing

The adaptive unconscious, the physician, and AI
2 comments