For many years and in disturbing frequency over the past few years, police brutality has been a big-ticket issue. The excessive use of force has led to innumerable acts of civil rights violation and, most tragically, the disproportionate death and destruction of innocent Black lives. There have been many debates on what to do to change law enforcement culture. But what has been weighing on my mind is the why. Why do some cops end up where they are, seemingly so cynical and angry?

Fair warning, this is going to a huge oversimplification. Everything I’m about to say definitely does not apply to every single police officer or to every physician. I don’t even know any police officers personally and am not trying to generalize what it is like to be in law enforcement. And I definitely don’t want sympathy for those inherently terrible, terrible people. But I have often wondered from my own experience as a doctor and being so close to so many other health care professionals – do police officers get jaded over time, just like a lot of physicians do?

When I set out to answer the question, I discovered this essay by an anonymous police officer who explains why he is the way he is. Here’s an excerpt about when he responded to a call of a pedestrian struck by a vehicle.

She looks me in the eye and says, ‘It hurts,’ and then she dies right in front of me. I maintain my composure and then I find out who the driver is. It’s a 16-year-old girl who just got her license. She mistook the gas pedal for the brake pedal when the victim stepped out into the roadway and she panicked when the car accelerated instead of slowing down. I look at the windshield on the car and see a large tuft of hair and scalp lodged in the spiderwebbed glass. I realize that it’s from the dead 15-year-old girl.

Later, as I direct traffic and watch that girl’s blood literally run down the gutter and into the street drain, a crowd of citizens gathers nearby. One loud-mouthed man in the crowd says, “This kind of stuff wouldn’t happen if these cops would do their jobs.” My first instinct is to leave my post, walk over to him, and cave his ignorant face in. But I don’t. I show no emotion. I hold my anger inside because I also want to cry for the girl and her family. I am the last person she ever saw on this earth and there was nothing I could do for her.

And another when the author responds to a Section 8 apartment where a baby is not breathing. It turned out her mother’s “boyfriend got tired of the crying baby. He pulled the 3-month-old baby out of the crib, raised her over his head, and threw her on the floor as hard as he could. The fall fractured her skull, shattered her pelvis, broke her pliable ribs, and killed her.”

The police officer later answers a citizen’s phone call to file a complaint against his department, but the author is distracted because he just “tried to talk to an 8-year old boy while the brains and blood of that boy’s father dripped from the ceiling and onto my uniform” after the “father put his brains on the ceiling with a .357 Magnum which he fired into his mouth as the boy watched”.

While reading his essay, I thought about my own medical training to become a physician. We, like a lot of other young professionals, had so many dreams about what it would be like when we get the job we have aspired to for as long as we can remember. The first day we step onto our first clinical rotation to meet our very first patient, we are so eager and full of life. We come early, stay late, sit with our patients for hours just so they’ll have someone to talk to, and go out of our way for them, even if it’s just to get them a cup of ice.

Then, we experience our first patient death. Then the second, the third, and the hundredth. Just like police officers, we see it time and time again. We see death and injustice in the most unbearable ways despite all our countless hours losing sleep and the endless years of medical training.

I have seen patients denied medical care and end up dying painfully because of their lack of health insurance. I once had a late third-trimester patient refuse any treatment for her intravenous drug addiction and leave the hospital against medical advice to shoot up more heroin on the street only to come back days later with fetal demise. I have had patients and their families yell at my entire team of nurses, social workers, and other doctors and me when all we are doing is trying to help and provide the best care that we can.

And the bureaucracy and paperwork involved in our daily lives become progressively more insurmountable. Even how we practice medicine has some roots in our fear of being sued. Because let’s face it, no physician is perfect, and no matter how we try and how much training we have, mistakes will happen, but the consequences can be absolutely devastating. On top of all, that is the astonishing amount of debt doctors accumulate because of our time spent training.

It also doesn’t help that physicians are asked to perform flawlessly more and more each day with increased efficiency and decreased costs. Just this past weekend, I was on call, covering all the emergent and urgent abdominal imaging cases for the entire hospital – just me and my trainee. Halfway during the day, I needed to perform a fluoroscopic procedure on a patient with stage 4 pancreatic cancer to rule out a bowel blockage. After I spoke to him about the results, I could tell he really wanted to keep chatting because he was friendly and was lonely in the hospital. But I could just feel my list of studies I had to take care of (including traumas and potentially life-threatening emergencies) growing by the literal second and had to excuse myself. That alone made me feel guilty for days. And I know other physicians and health care professionals deal with much worse every single day.

Every job is tough, no matter the career field. And I would never make excuses for those that are racist, bigot, or intolerant. But I do wonder if some police officers start off just like we do – bright-eyed with hopes of making a difference – only to have the reality of life slowly chip it away, day after day. 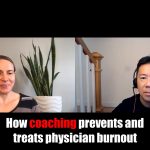 Doctors for truth: Fighting for trust in an era of misinformation