One of my coworkers who grew up in India told me that their teachers in grade school would post everyone’s scores in the hallway after every exam.  This comparison of grades and objective testing further extended to cities and even regions in the country.  There are people going through the hierarchical ranks with “gold medals” in science or engineering.  Throughout this process, it was relatively transparent who the smartest or highest achieving people (at least on paper) were.  The “winners” in the system also got the best opportunities for jobs and potential to move to the United States.  He once asked me why the hospital systems aren’t transparent about doctor salaries or executive salaries.

While there isn’t a single best answer to his question, I began to wonder how our health care system would fare if incomes were publicized.
Can grades even be compared to income? No way.  There is a finite cap on grades, and everyone in the class can theoretically earn a 100 percent if no one ever misses a question.   There is only so much money floating around in the world.  Not everyone can get a “100 percent” on their salaries.

Corporate America can do it

The corporate world often discloses the compensation of some of its management members under their shareholder agreement.  Non-profit entities have to disclose their executive compensation schedules through a 990 form; this is a powerful resource for you financial voyeurs who want to see what other people are earning.  Remember, all non-profit institutions (read: hospitals) file this publicly so you might actually find some interesting financial information on your coworkers or friends.  Some of the names on these compensation schedules belong to doctors, but these numbers are unrelated to what doctors earn in their clinical practice.

Posting salaries of your doctors

Clearly publicly posting one’s income is not really a socially acceptable analogue to posting grades in school.  The inherent problem with the public being aware of your physician’s salary is that laypeople truly have little idea what goes into the training or daily routine of a doctor; they just see the salary and judge based on a number.

What might actually be an interesting scenario is if everyone’s compensation within a hospital or medical group be listed.  This includes everyone: the janitor, all of the mid-level managers who make your lives hellish, all of the HR people who litter their email signatures with online and fabricated degrees. And the one guy who doesn’t do much of anything but still gets paid more than the pediatricians and family medicine doctors in the group.

Here is a hypothetical layout of the salaries of Medical Group A:

While physicians still remain at the top of the income chain, you might be surprised how many hands are in the pot.  At the basic level, doctors (and to a certain extent, advance practitioners and physician extenders) are fundamentally responsible for bringing in the revenue.

However, this revenue has to be distributed among all of the other workers in the organization.  And we all know that the number of administrators in health care has grown by several thousand percent since the mid-1970s.  What has been most revealing in speaking to various hospital personnel is that most non-physicians have little idea what doctors actually do, even though they are working alongside the doctor!

In the end, I realized that nothing good would come out of posting anyone’s salary.  We would actually lose out as doctors because what people want to see are numbers, not how much work or how long it takes to get to where you’re at. 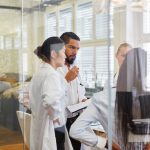 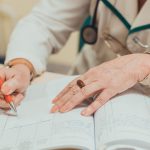