Harry understood at last that he was not supposed to survive. His job was to walk calmly into Death’s welcoming arms … All those times he had thought that it was about to happen and escaped, he had never really thought of the thing itself: His will to live had always been so much stronger than his fear of death … It was over, he knew it, and all that was left was the thing itself: dying.

– “Harry Potter and the Deathly Hallows”

Unwittingly, I tried to escape the gravitas of oncology by retreating to the nostalgic comfort of Harry Potter. As a child, I found respite in Harry’s fictional world filled with magic spells and potions. In the middle of residency, my bookshelves bending with the weight of textbooks, medical journals and physician memoirs, I was ready for a feel-good book.

But, instead of escaping into fantasy, I picked up the final book in the series to discover that magic wasn’t a thing of fiction, but was readily found at work. Every day, I see people reckon with fear, death, and meaning. I’ve watched many patients steel themselves against both the unknown and the certainty of the end. It’s a type of bravery that moves me, and I wonder if I might be so courageous.

However, death is not always met with peace. Our will to keep people alive is so much stronger than our acknowledgment of mortality. J.K. Rowling knew this — in the book, she embeds an allegory of three brothers who escape Death, and receive three gifts as a reward:

The oldest brother … asked for a wand more powerful than any in existence … a wand worthy of a wizard who had conquered Death!

Ana* was so young, too young to face the metastatic melanoma that exploded through the lymph nodes in her neck. They had been cut away once before, then they were radiated but grew without signs of relenting. Re-irradiating the neck came with dire consequences — the carotid artery could burst open resulting in sudden demise. But she had already been through surgeries, radiation, immunotherapies and was hoping to land a spot on a clinical trial — a hint of magic that could buy her … tumor shrinkage? Time? But not cure. I wasn’t sure if she or her family knew that the most promising medicine could not grant her immortality. The greatest weapons medicine had could not beat Death for good.

And so Death took the first brother for his own.

Then the second brother … asked for the power to recall others from Death.

“Billy!*,” our team greeted the young man in the corner of the ICU. His mother sat at his bedside, his hands clasped in hers, fingers intertwined, as we donned sterile yellow gowns and purple gloves. Every day for months, we tinkered with his ventilator, taking small comforts in the days he needed “less” help than the day before. I would notice when he “looked better,” — his mother would have placed his red baseball cap on his head, and it felt like he was present, watching the game on TV, rooting for his home team. Billy’s mother insisted he was happy — maybe that day, he seemed to smile when she told him a joke, or his breath rattled less. He hovered between worlds — he was barely conscious, but he could not survive outside the ICU. Yet, we faithfully labored for weeks — because what was his mother’s world, without the breath, though not his own, of her only child?

He took out the stone that had the power to recall the dead … the figure of the girl he had once hoped to marry … appeared at once before him. Yet she was sad and cold, separated from him as by a veil … Finally, the second brother … killed himself as truly to join her. And so Death took the second brother for his own.

Ms. Cobb* was an elderly woman with a failing heart — strapped with electrical wiring trying to awaken a rhythm it had long forgotten — with a valve eaten away by infection. She was too weak, and her lungs were filled with fluid. So she was sedated, and a breathing tube was placed. The waiting room in the ICU was filled with her brothers, sisters, children, and grandbabies — a community of people who were ready to stand with Ms. Cobb until the very end. It was the magic of the palliative care team that helped the Cobb family to understand the inevitable, ask questions, express fears and regrets and to find strength in each other. And in the final moments of Ms. Cobb’s life, the family decided to lift her sedation and remove her breathing tube, so she could be present, even if only for a moment. She spent a brief evening chatting with her family before she drifted away.

And then he greeted Death as an old friend, and went with him gladly, and equals, they departed this life.

No matter what we do, no matter what miracles we aim for, to be human is to be mortal. We will all certainly face our ends in one way or another. The lessons of Harry Potter and the Deathly Hallows show us that fear and bravery come together in the face of death. In medicine, we don’t always recognize the magical gifts we have. Palliative care is that gift — it helps patients imagine a future, where they greet death as an old friend and depart this life as equals. 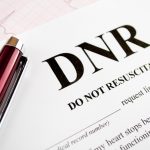 The lessons of Harry Potter and the Deathly Hallows
1 comments