I used to practice locums medicine; which for the lay person means traveling to different jobs, sometimes several states at a time.   During that time I stayed in a lot of hotels.  But, occasionally, I had more unique accomodations.  Obviously, if you travel enough, you’ll sleep in an airport here and there. No big deal.  I actually like sleeping in airports occasionally.  When you’re stuck, you’re stuck.  Weather or mechanical issues, it’s fun to watch everyone freak out.  I’ve put my carry-on under my head and passed out cold in the waiting area.  Probably snored like a freight train.

I have also been put up in apartments owned by the hospital. Not necessarily bad, although one of them felt as if it really weren’t in the safest part of town.  I wouldn’t leave my things there, and I insisted on a hotel.  Such is the power of locums.  I had a nice room the next night.

Once I had to spend my first night in a sleeping room, after hours, in the back of a local mental health clinic.  That was a little creepy. Again, I said, “no mas.”  I had no interest in being accidentally committed.

I’ve also slept over in hospital call-rooms, even on days off. That can be good or bad, but generally, the beds are wretched.  Which always makes me wonder why patients are so anxious to get into them.  I guess any bed beats an ER gurney.

In one small, critical access facility, I worked 24 or 36-hour shifts and stayed in a converted patient room.  I felt a little like a very old man, raising and lowering the head of the bed, and listening in the hallway to hear nurses walking up and down, taking care of the elderly who were there for rehab.  I ate off of hospital trays, sometimes reclining on my hospital bed.  I may have gotten a little too “into character.”

Today, however, was unique. I’m not doing locums per se, but I’m working a full-time gig out of town; three or four on, seven off. The hospital has an apartment that it keeps for us to use.  However, after I worked overnight last night, I was given a key and an address and sent off to find my sleeping hole.    However, at 6:00 a.m., the lights were dim, the signs were poor, and I had almost no idea where to go.  In the dark, I was driving down abandoned streets, looking at windows and doorways, skulking up stairs in a retirement center, trying to figure out just where to go.  Confident I would eventually be arrested, tased or shot, I went back to the hospital and a few phone calls later I was told where to go.

Indeed, my apartment was on the premises of a retirement community/nursing home. At 6:30 I was admitted to said nursing home where the lights were bright, the news on, and on old man propelled himself in his wheelchair, while holding coffee and looking at me suspiciously. It had that feel of a place where the day is about to start, but the changing days mean nothing.

I had a momentary terror, that I had it all wrong.  Was I really leaving my shift, my 53-year-old self-sleeping off the busy night?  Was I still in my vigor?  My children still unmarried and my wife a couple of hours away, looking forward to my return?

Or was one of the kids going to come to me and say, “Papa remember, you retired.  This is your home now!  We’ll visit you later, now go back to bed.”  Shudder.  Anyway …

A kind nurse took me to my apartment, and out of the off timelessness of the nursing home proper.  I slept a while, and left to go home.  However, due to some schedule issues decided to stay in town.

Rather than return to the apartment, which would be in use by the next doc and would consign me to the couch, I got a hotel room.  “Ah, rapture!  Cool sheets, dark shades, television before the bed!”

But as I checked in, I was cautioned, “We’ll be testing the alarms, don’t worry!”  I didn’t.  And then, for about two hours the fire-alarm intermittently sounded, all but deafening me.  My ears still ring from the thing.

Finally, it stopped, and I slept off some of the night shift and its exhausting chaos.  And I was not shot, stabbed, tased, arrested, committed or restrained due to dementia.

It was, therefore, another pretty good day. 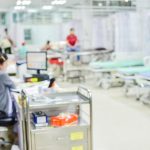 The surprising sleeping arrangements of an emergency physician
1 comments