The return from a vacation weighed on me physically.  This had been a true vacation — an entire week away from clinic and spent with my family.  I even managed to unplug to the point of only checking email on my phone twice per day — really!

The tension that years ago took up permanent residence in my shoulders had faded away without my noticing, so that when I awoke to its sudden return, I realized that for one wonderful week I had almost become used to its absence.  Almost …

Why do I do this again? I asked myself.

As I contemplated this question, it was as if the burden of our profession sat quietly next to me on the floor, waiting patiently for me to pick it up.

But I didn’t mean to actually put you down, I told it.

I know, it seemed to reply in its silence.

But really, I didn’t want to put you all the way down. You’re too hard to pick up again.  I just meant to put you down a little bit.

What if I just don’t pick you up again?

Fine.  Stay there while I go take a shower and think about whether I’m coming back to get you.

My thoughts wandered back in time to a backpacking trip in AK some two decades ago.  I had gone with several friends who were somewhat more physically conditioned than me.  We were doing an overnight backcountry camping trip.  As I shouldered the pack, with sleeping bag and supplies, and fell in line behind my friends, it didn’t take long before I worried about how I was going to keep up with them while carrying my load.  My ego prevented me from asking them to slow the pace, so I looked down at the trail and concentrated on putting one foot in front of the other.

When they finally stopped for a break, I gratefully set my pack down.  But realized when we started up again, it felt twice as heavy having set it down for the brief rest.  What did I get myself into? I wondered, as I staggered along at the rear of the group.

But later that night, when we finally made camp, in wilderness undisturbed by roads, accessible only to those who were willing to make the trek, in the land of the midnight sun, I looked around in awe and appreciation.  The burden had been worth carrying.

I finished dressing for work and brought my mind back to focus on the present.  I thought about the patients on my schedule.   I glanced down at the burden of our profession, still patiently waiting.

Well, come on then, I told it, what are you waiting for? 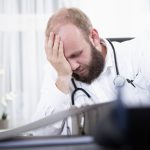 Is health care a right or a privilege? Why can't the answer be both? 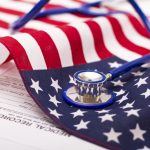 The burden of the medical profession. Is it worth it?
5 comments