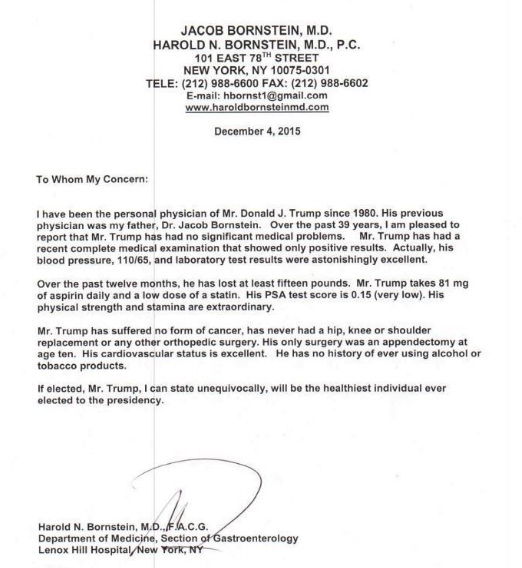 Donald Trump is talking about Hillary Clinton’s health as are two doctors who have never evaluated Clinton. This attention on Clinton has renewed some interest in the letter Donald Trump released last year from his personal physician.

Many outlets have picked it apart, but I want to tell you as a doctor exactly how bad it is. I would never write anything this terrible for a jury duty excuse or a back to work note, never mind something that half the country (and possibly half the world) might see or could possibly end up one day in a presidential library.

There are so many issues with the letter I’m going to just start at the beginning:

The header has a nonworking web address and doctors’ don’t include e-mail addresses in letters.

It is incredibly rare for doctors to include an e-mail address in this kind of correspondence because we don’t want the person receiving the letter (e.g., the entire press corps or the place of work or the disability insurance company) to e-mail back with questions about our patient’s health. This could lead to a HIPAA (privacy) violation. Also, Gmail is not a secure method of communication, so most doctors don’t want to use it for medical information. We doctors also don’t put our email address in letters because we don’t want patients using unsecured methods of contact. I’m happy to have my patients email me; they just need to do it through our secure server. The email address is really odd, but then again it could be a fancy concierge doctor thing.

Except a fancy concierge doctor would probably have a working website. Really, you’re writing a letter for someone who wants to be president, and this is what we get: a weird website with a name and links to other services? 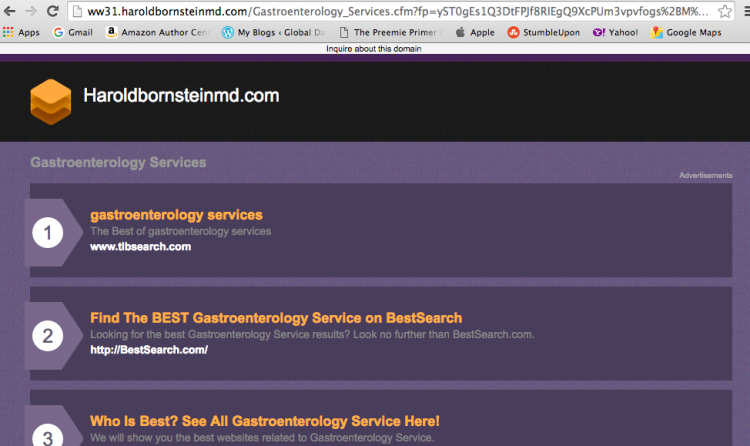 Lennox Hill has a Division of Gastroenterology not a Section and Dr. Bornstein isn’t listed on the website as a member. 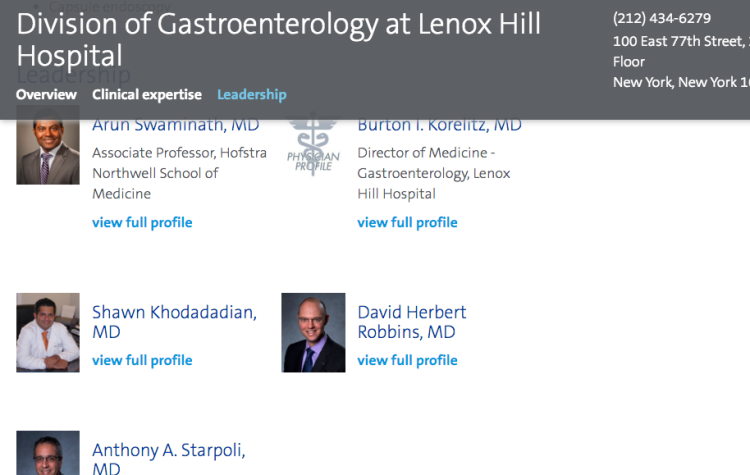 Dr. Bornstein is affiliated with Lennox Hill, but he is not part of their division of gastroenterology. There also isn’t a department of medicine there is a division of general internal medicine and Dr. Bornstein isn’t a member of that either. Having admitting privileges and being a division member are not the same thing. Many hospitals allow doctors to have admitting privileges and not be department or division members. And what’s with this made up Section?

It is also very odd for a doctor in a private practice to use their admitting privileges address under their signature if it is not the same as their practice address.

The letter starts with a typo.

I’m the typo queen, so I’m not really one to judge, but if a patient of mine were running for president and needed a letter, I’d make damn sure it was typo free.

No doctor describes tests as “only positive results” or  “astonishingly excellent.”

What are “astonishingly excellent” laboratory test results? I’m a doctor, and I don’t know. Is it astonishing that a 70-year-old man has normal results? Are his results all exactly average which is good – but wait, I thought his tests are all positive?

And while we’re at it doctors just don’t say “laboratory test results” that sounds like something on a soap opera.

Doctors don’t say “test score” we just give the results.

The conventional way to reference PSA would be PSA 0.81 ng/ml (normal < 4 ng/ml). A test score is something that happens at the DMV.

How did Dr. Bornstein test Donald Trump’s strength and stamina?

Did he have him bench press in the office? Do a treadmill test? Doctor’s just don’t typically write vague, quasi-medical things in letters. I’ve also never heard of a stamina test.

An internist might test muscle strength as part of a physical exam, but the results are graded 0-5 and 5 is not secret code for extraordinary it’s code for normal.

“The healthiest individual ever elected to the presidency.”

Every news site has pointed out how ridiculous this is. Dr. Bornstein is not a medical historian who runs a Presidential health archives and obviously Washington and Lincoln never had their PSA checked for comparison. The first blood pressure cuff was invented in 1881, so yeah.

There is no useful health information.

Someone with Parkinson’s or Alzheimer’s could have a normal blood pressure, normal PSA, take 81 mg aspirin and be on a “low dose” (we don’t know the exact dose or type) statin. So could someone with diabetes or someone who had a heart stent placed last year or who had a stroke four years ago.

That Dr. Bornstein is a gastroenterologist. Often when internal medicine specialists start out, they accept both general medicine and specialty patients. As the years go by they stop accepting general patients, but often hang on to a few favorites or high-profile patients. It’s done less now, but in the 70s and 80s, it was more common. Bornstein may very well have been seeing Trump in that capacity. But yes, a healthy man would not need to see a gastroenterologist until the age of 50.

Newsweek pointed out the letter was made on Microsoft Word, but the header on my work letters is generated in the same type as the letter. Sadly, many doctors don’t use lovely heavy bond paper with nice letterhead anymore. But you know when I would? If I were writing a letter for someone who is running for president.

The signature: I hit return a lot for my huge signature and still sometimes scrawl all over the address. Hey, I’m a doctor.

Did Dr. Bornstein write it? If so he should be embarrassed. It’s medically illiterate, and if he doesn’t know his website doesn’t work or if that he’s not in the division of gastroenterology, that’s an issue.

Did Trump write it? He’ll never tell. It certainly reads like a letter written by someone with close to no knowledge of Dr. Bornstein’s practice or medicine.

After this was posted someone mentioned that Dr. Jacob Bornstein died in 2010.

Was an old doctor’s letter used as a template with the person copying the letterhead not knowing or remembering that the elder Dr. Bornstein had passed away? Is this Dickensian six-year-old letterhead with the name of the deceased still at the top?

Why we should remember our moments of vulnerability 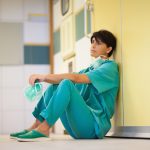 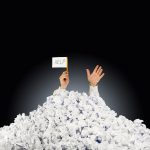