“Have you had any horrible problems with wait times?” shouted the reporter as he jogged towards the van pulling out of the parking lot.

Leaning in so far that his head actually crossed the window’s threshold yet still audible from across the street, he continued “We’re looking for people who’ve had terrible experiences here!” So it was last week walking in to work at the Durham VA Medical Center.

One year ago, a health care access crisis for America’s veterans was exposed. An internal audit found more than 120,000 patients had care deferred temporarily or indefinitely — many of whom found themselves in unofficial lists generated to conceal lengthy wait times. Unachieved timeliness resulted in unspeakable tragedy. The report concluded that 35 veterans in the Phoenix VA system died while waiting for care.

A cabinet secretary resigned, and executives were fired including the official in charge of the Phoenix facility. A new secretary was appointed, and Congress passed the Veterans Access, Choice, and Accountability Act of 2014. The law provides financial reimbursement for private medical care to veterans who encounter significant administrative or geographic barriers to receiving VA care. It also sets aside funds for increased staffing and facility procurement. And it gives the Secretary more latitude in firing underperforming employees.

The law also increases support for one of the less frequently mentioned missions of VA: graduate medical education. After medical school, physicians-in-training typically complete a 3 to 7-year residency in their chosen specialty. Almost 10 percent of these positions nationwide are funded by VA, which spent $1.44 billion in 2012 on training the next generation of physicians. As a result, over 40,000 physician trainees care for veterans annually in 128 of the 150 VA medical centers.

In Durham, the partnership between Duke Hospital and Durham VA is a prime example. Most Duke residents who care for adults in medical and surgical subspecialties will rotate through the VA in an inpatient or outpatient role during their training. This offers trainees the unique privilege of caring for a population whose service contributed to the state of the world as we recognize it today.

It is also a special point in history to care for veterans. A general medicine inpatient service today may have veterans from the intervention in Libya, both wars in Iraq, the wars in Afghanistan, Korea, or Vietnam and many other conflicts — named and unnamed alike. Rarely, we are blessed to care for a World War II veteran who has nearly outlived a generation, a patient whose sacrifice helped save the world.

Much has been written about the contemporary sociocultural gap between America’s citizens and the all-volunteer military that defends her. Currently, less than 1 percent of the country serves in the active duty or reserve armed forces. In highlighting this divide on his visit to Duke in 2010, Defense Secretary Robert Gates noted that in 1988 about 40 percent of 18-year-olds had a veteran parent. At the turn of the century, it was 18 percent and soon it will be fewer than one in ten with a parent who served.

Since the declaration, physicians have been leaders in American society. Now more than ever, our leaders need to know the character of our military. Experience at VA during residency training is important both for clinicians and the country.

Because of the VA reform law, veterans will have access to 1,500 new residents over five years. And like their predecessors before them, each will have a scandal-free secret list: a lab order to follow-up on. A patient to call regarding a blood test that resulted after discharge. A medication obtained from the pharmacy. A subspecialist appointment scheduled and attended. A list that certainly includes VA patients and Duke patients. A list of things that absolutely must get done.

This is the tedious work of tenacious trainees. Their exemplary behavior offers a lesson for those who perpetuate the “corrosive culture” at VA: If it’s right for the patient, it’s the right thing to do.

As a result of the expansion, there will be two more residents learning how to do the right thing for America’s veterans on the general medicine inpatient service at Durham VA in July. That’s not nearly enough, but it’s a start.

The access crisis is improving too. Of the 71,000 appointments scheduled since March, almost 90 percent of patients have been seen within one month.

“No complaints here,” the veteran replied. “My doctor takes great care of me.” I sensed that this wasn’t the first time he handled an impolite interlocutor with dignity and respect.

That is not everyone’s experience. There is more to be done. A recent report by the Associated Press says that one in 36 veterans still waits a month or more to see a physician. In that way, scrutiny is good. Investigations should continue. A robust free press is essential to a vibrant, functioning democracy.

But a search for the sensational needn’t be pursued insensitively. Please don’t shout at my patients on their way out of the hospital. But if you must, the words you’re looking for are, “Thank you.”

A radiologist vs. Marc Cuban: 6 answers to his questions

Counting 80 hours: The life of a pediatric resident 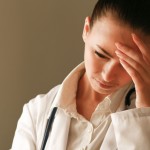