Many experts have pointed out that these problems are two sides of the same coin. On the cost side: the high price of medical care makes doctors and hospitals into lucrative litigatory targets. On the malpractice side, litigation drives up health care costs by forcing physicians to charge higher fees so they can pay costly malpractice insurance, and by incentivizing these same physicians to order unnecessary tests and procedures to avoid getting sued by patients who expect such interventions.

Because of the close connection between health care costs and our malpractice system, many experts contend that if we fix the latter — if we reduce the chance that health care providers will face frivolous lawsuits — we will lower costs, by reducing the need for doctors to practice defensive medicine. In effect, we’ll, um, kill two sides of the coin with one flip. (I know: Time to abandon this metaphor.)

An October study in the New England Journal of Medicine showed no reduction in health care spending in states that reformed their malpractice systems. The study focused on three states — Texas, Georgia, and South Carolina — which between 2003 and 2005 had reformed their malpractice systems so that emergency care providers could only be sued for offering care that was “grossly negligent,” a high legal bar that strongly dissuades lawyers from filing frivolous lawsuits.

If you are a physician in, say, Oklahoma, and a patient comes to your emergency room with uncomplicated low back pain, you might know medically speaking that the patient does not need a CT or MRI of his spine. But if you are worried about a malpractice suit, you might order such a test just to be safe. By contrast, in neighboring Texas you would have no reason to think this way, because you would recognize that no lawyer could make the case that forgoing an imaging test would be grossly negligent.

If you’re a doctor in North Carolina caring for a person with moderate pneumonia, you might know that her symptoms can be treated with oral antibiotics and a follow-up appointment in the primary care clinic. But you might admit her to the hospital anyway, out of concern that if her symptoms progress and she starts experiencing any kind of adverse effects, she will “lawyer up.” In South Carolina, on the other hand, you will have no lawyerly incentive to admit her to the hospital.

To test whether malpractice reform reduced health care costs, a research team led by Daniel Waxman from RAND matched each of the three reform states to five neighboring states that had no such reform. They mapped out changes in health care spending and utilization, both before and after the reforms took place. The idea here is to look for an inflection point, a change in the trajectory of health care spending in the reform states that is not seen in the states which stuck with the status quo.

Instead of inflection points, however, the researchers uncovered a series of largely parallel lines, with the exception of Texas where health care costs actually increased rather than decreased relative to its neighbors after the malpractice reform law was passed: 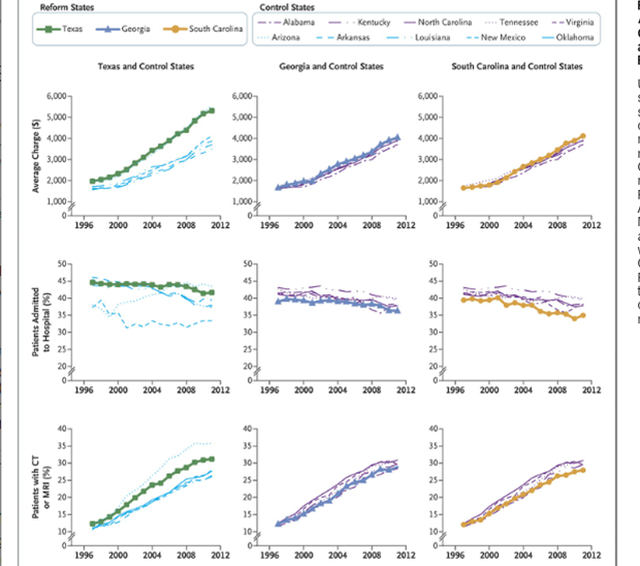 Average costs of emergency care? No reduction. Percent of patients sent to the hospital after emergency room evaluations? No lower. Proportion of patients receiving CTs or MRIs? Not. A. Smidgen. Of. Restraint.

There are a slew of problems with the American malpractice system. Careful studies have shown that lawsuits do not effectively target poor medical care. Many a physicians’ career has been unjustly ruined by frivolous lawsuits. But we can no longer claim with confidence that our malpractice system directly leads to increased health care expenditures.

Malpractice reform isn’t likely to save us money. But we should reform the system anyway.

What do bridges and public health have in common? 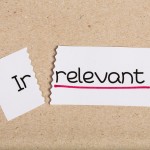