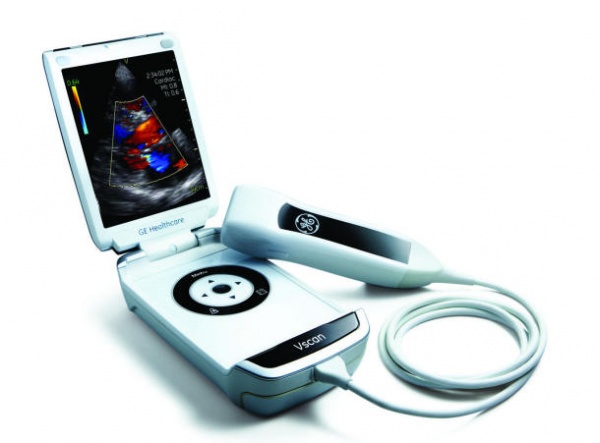 It was an unexpected and welcome bonus that my patients and their families loved it. I would share the moving ultrasound pictures with them, often having them hold the machine so I could point out how beautiful their internal organs were and what we could see that helped give us a clue about their disease process. Many of these same patients also got full, detailed ultrasounds or other imaging by radiology technicians, but since the technicians aren’t supposed to discuss findings with the patients and often they couldn’t see the screen, it wasn’t nearly as gratifying.

The most common comment I get from patients is, “Wow, that’s really cool!”  “I agree!” I answer. Then they will ask, “Why doesn’t everyone have one of these things?”

That is kind of a difficult question. “They’re pretty expensive,” I usually say. They are. At least for now. The little machines (Vscan, by GE) retail for over $8,000, though you can buy them cheaper used or overseas. Physicians balk at spending this amount of money on a piece of equipment. Most of the expensive gadgets we use are owned by hospitals or by our group practices.

Musicians, however, who make a fraction of what we do, buy their own musical instruments which often cost in excess of $10,000. I’m not sure the cost ought to be a serious consideration. Other doctors often ask me if I bill for my exams. I don’t, because billing and the detailed documentation and posturing that would be necessary to prove to an insurance company that an ultrasound was necessary would take more time than I have. I report the results in my narrative of the physical exam, much as I do the findings of my ears or my hands or eyes. There are billing codes for limited ultrasounds, and if I were able to record and store my images easily I could probably boost my revenue, but that would make me feel just a little bit conflicted every time I did it. I would have to tell the patient that I was charging for it which would probably make them feel conflicted as well, or maybe choose to forgo the exam, which would mean that I would know less about what was going on and would be more likely to make a mistake.

“It also takes a long time to learn,” I add. I have spent hundreds of hours in  learning from good teachers, mostly in person, but also online. I have done many thousands of exams and have reviewed a fair number with experts. But it is actually pretty quick to get good enough to be sure of a handful of different things that make a huge difference in making clinical decisions. After that, much like most of the things we do in medicine, learning expands exponentially with on-the-job experience. Many students in medical school now are learning how to use ultrasound at the bedside as part of their standard training, which is really the best way to do it.

“When did those things come out? I’ve never seen anything like it!” say my patients. The little pocket model I have has been available for at least 5 years, and there have been portable ultrasounds for considerably longer. The company that makes mine has not been aggressive in marketing it, even though it is potentially as huge a deal as the introduction of the stethoscope, and other ultrasound companies have been incredibly slow in developing competitive models.

Maybe it’s just difficult to develop the technology, but I think it’s a little less wholesome than that. Ultrasound is a huge part of what radiology departments in hospitals and clinics do. It has grown as we have become aware of the dangers patients are incurring with the expanding use of imaging based on x-rays, such as CT scans. Full-scale ultrasound exams are performed by radiology technicians using machines costing hundreds of thousands of dollars, are read by radiologists or cardiologists and billed out for thousands of dollars each. If physicians at the bedside are doing these exams for free, or even for cheap, this has the potential to negatively impact huge revenue centers. It is not in the financial interests of the whole industry for the manufacturers to produce an awesome pocket machine.

A bedside ultrasound, which takes minutes, is hardly the same as a full scale ultrasound or echocardiogram which can take almost an hour to perform by a technician who does only this. In some cases we may order more ultrasounds because of what we see, or think we see, at the bedside, but for some questions our brief and focused exam will be enough and will supplant imaging by the radiology department.

There is also abundant controversy about adding routine ultrasound to the way we practice medicine. It is a “disruptive technology” which means that it potentially changes things in far reaching ways, many of which can’t be adequately predicted. We may see things inside patients that are best left unseen or are difficult to interpret. We may thus end up chasing findings that are nothing and costing patients more money and anxiety than we should. I have not found this to be true, however.

Imaging of all kinds, especially the detailed kind that comes out of radiology departments, is often misleading and anxiety provoking. Think about the majority of mammogram abnormalities that turn out to be nothing or adrenal “incidentalomas,” the small meaningless lumps we see on the adrenal glands when CT scanning the abdomen. Combining bedside imaging with examining the patient, talking to them and reviewing laboratory data has been much less likely to lead me to misdiagnoses than to appropriate ones.

Many older physicians are trying to adjust to changes that make them feel that they are losing the profession that they used to practice skillfully in the past. We are asked to learn to use computer systems to document patient visits, review medical histories and order treatments. We start to become data entry technicians, and we aren’t very good at it. We are asked to learn continually changing algorithms for treating a myriad of diseases. We are required to provide excellent preventive medicine for our patients so they don’t have heart attacks or strokes or get cancer, when research on the proper way to do this makes what was wise one day stupid the next.

On top of this people like me with our tiny little ultrasound machines come along and say, “Hey … there’s this other thing you need to do too …” But I would love for my overworked and stressed out colleagues to know that this is different. Data entry is not inherently fun. Robots or trained monkeys could probably stay on top of the preventive to-do list better than we do, and algorithms don’t give us much job satisfaction, even if they do help us deliver evidence based treatments. Bedside ultrasound, though is terrifically fun and despite the time and effort required, brings back some of the joy of being a real doctor. I say this after a quarter of a century doing the job.

So, “Yes,” I tell my patients. “I agree. It is incredibly cool. We are looking at the inside of your body together and learning things. It’s unusual now, but I’m pretty sure it’s not going to be too long before it’s part of what most of us do.”

An organic effort to reboot healthcare

Why doesn’t everyone have a pocket ultrasound machine?
26 comments