Wherever health care reformation and transformation is discussed, sooner or later the imperative of patient engagement is sure to materialize. Patients, it seems, are no longer content to be passive spectators while care is administered to them, and instead are demanding to be active participants in their own health care decisions. Gone are the paternalistic days of doctor knows best, replaced by informed and educated patients on an equal footing with physicians when it comes to diagnosing conditions, selecting therapies and managing illness, or preventing disease altogether through judiciously chosen lifestyles and preventive measures.

And what makes this tectonic shift in attitude possible? Technology, of course, and specifically the Internet and the iPhone. Patients today have access to troves of medical information on the Internet, and social media allows for informal research on any condition you can think of, and some you cannot even imagine. The iPhone, turned medical instrument with the assistance of thousands of apps and add-on devices, is allowing everybody to carefully track and monitor their lifestyles, biometrics, medications and whatever else they wish to quantify. iPhones are already providing some diagnostic testing and it’s probably not too soon for Quest and LabCorp to start paying attention to these engaging developments.

The government is also very interested in promoting patient engagement, since engaged patients who can monitor and maintain healthy lifestyles, and if already sick can self-manage their chronic conditions, will presumably utilize less medical resources and should cost the system less than their apathetic predecessors. And for similar reasons, private insurers and employers are fully supportive of patient engagement as well, and are diligently working to provide patients with educational tools and resources for engaging in their own care within the cost optimizing care management universe. Patient engagement is also one of the pillars of Meaningful Use and as such it is creating the necessary infrastructure and associated regulations to ensure that patients have meaningful access to all medical records previously locked up in providers’ information vaults. This is extremely important because patients cannot truly engage in lifestyle improvements and self-care on a level playing field with their physicians without complete knowledge of their medical conditions as documented by a physician, and as augmented, translated and analyzed by iPhone apps and the Internet at large.

Earlier this year Chef Mario Batali, an extremely engaged and empowered individual, decided to engage himself and his family in an innovative lifestyle change experiment of his own. For a full week, seven days, Chef Batali and his family went on a SNAP diet. The Supplemental Nutrition Assistance Program (SNAP), a.k.a. Food Stamps, diet consists of eating whatever you can buy for $31 a week. Of course, being handy around the kitchen, gave Chef Batali a bit of an advantage, but all in all, according to the Huffington Post, his description of the experiment was “I’m (expletive deleted) starving”.

There are 46.2 million Americans living in poverty today. Poverty is currently defined as less than $23,021 per year for a family of four. There are 47 million people in the SNAP. 22% of American children live in poverty and in our Nation’s Capital, next door to Congress and the White House, 35% of children are poor. According to the USDA, 17.9 million households were food-insecure in 2011 and 6.8 million of those had very low food security, which translates to 49 million Americans who don’t know where their next meal is coming from, or if it’s coming at all, and 16 million of those Americans are children. A fairly new study from the University of Michigan and Harvard concludes that at the start of 2011, “2.8 million children were surviving on $2 or less in income per person per day in a given month”. And NCFH reports that in 2010, 1.6 million American children were without a home.

What does this have to do with patient engagement? Well, for starters when you are “(expletive deleted) starving”, it is a bit more difficult to muster the mental prowess required to engage your health care provider on a level playing field. The landmark “quasi-experimental” study on inviting patients at several elite health care institutions to view their visit notes, published earlier this month, did not measure the level of hunger amongst participating patients and/or their children. So, if you are building patient engagement paraphernalia and expect to be paid for your efforts, your target market excludes the 49 million food-insecure Americans and in all likelihood excludes most of the remaining 50% of Americans living on less than the $50,054 median income, and probably the vast majority of the more fortunate 50%, some of whom may be able to afford your products if they were chronically ill or actively preparing themselves for medical disaster, which most are not. This is probably why patient engagement is something thrust upon the health care scene from above, just like EHRs, and not a market demand sprouting from unfulfilled needs of would be buyers. And this is also why, patient engagement campaigns, just like EHR adoption efforts, are financed by the middle-men of health care (i.e. those who use our collective health care dollars to purchase medical services on our behalf), in the belief that somehow patient engagement fueled by technology will reduce the costs of medical services. These “purchasers” of health care services are the most likely target market for patient engagement tool builders, service providers and the quintessential consultants.

This is not an entirely bad idea, just like covering a gaping wound with a Band-Aid is not an entirely bad idea, and there is plenty quasi-experimental and quasi-scientific research to show mild correlation between costs and technology, and it doesn’t take a genius to figure out that if patients managed their own care, and if they did it well enough, we would need to pay less to medical professionals for doing the same. The new iPhone and Internet based care management products are certainly promising to dramatically improve lay patients’ abilities to take care of themselves. The mountains of patient education tools and materials written at a “culturally appropriate” 4th grade literacy level with lots of colorful pictures and big fonts are presumably targeting, amongst others, those who are on and off “(expletive deleted) starving”, and may even help avoid a trip to the ED for some asthmatic children surviving on $2 a day. But this type of palliative approach to poverty is not likely to have significant impact on costs of care, because instead of shrinking away and perishing, poverty seems to grow and expand by leaps and bounds, and since 1/5 of our future generation is infected, the growth of expenditures well into the foreseeable future is pretty much guaranteed. Why? Because poor people are disproportionately sicker than rich ones (see CDC numbers below), and no amount of colorful pamphlets and free apps is going to change that. 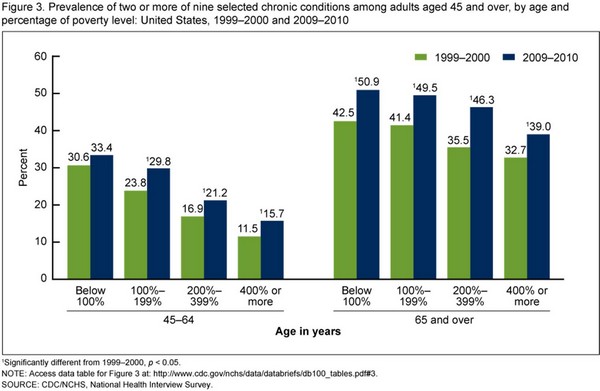 If you are one of the many talented and passionate people working diligently to improve health and health care in this country, you may want to quit the Band-Aid public-private industrial complex that is squandering billions of taxpayers’ dollars in a futile attempt to provide cheaper care to poor people, and perhaps consider redirecting your efforts towards solving the underlying problem of poverty, and reducing to zero the number of Americans, particularly children, who are “(expletive deleted) starving”.