I’ve been practicing internal medicine for over a decade now. I was drawn to this field because of my admiration for Dr. William Osler and the superb physicians I have met who embody his qualities. As an internal medicine physician, I am expected to be a critical thinker and a “doctor’s doctor,” specializing in complexity and solving problems with multiple layers, like peeling an onion. However, I never imagined that this profession would bring me personal tears.

Everyone has their own sad stories and triumphs, and mine is no different. People often describe me as resilient, and I used to take pride in that label. I thought that as long as I bounced back from difficult situations, everything would work out. My life has not been easy; my childhood was less than ideal, and I suffered a serious accident in college that changed my life course. I lost a pregnancy during graduate school and was diagnosed with a terminal illness during my pregnancy, if left untreated. However, with the help of a supportive spouse and attending physicians, I was able to bounce back and become resilient once again.

A few years after becoming an attending myself, a colleague’s father, who was also an MD, was shot and killed by a patient. A couple of years ago, a beloved pediatrician was held hostage and murdered in her Texas office. Although I didn’t have the privilege of knowing her personally, this tragedy hit close to home because I had trained in the same system. I thought that my organization, being as large as it is, would take necessary precautions and provide education on how to prevent such tragedies. However, I was wrong. All we received was an online review of what a “Code Silver” meant.

So, when an angry patient made a death threat towards me and nothing was done by my organization, I was shocked and deeply betrayed. I was not notified until more than an hour after administration was aware of the threat, and even then, no action had been taken. I insisted that the authorities be called. As a result, the patient was arrested and, to my surprise, three police cars arrived to escort me to pick up my children from various locations and take us somewhere safe, since my husband was not home. This was just the beginning. The police cleared the area around my home and advised me to update my security system. My children were very confused as to why police cars arrived at camp with me.

I was terrified and didn’t let my children play outside for weeks. On the police’s instruction, I changed my driving patterns while waiting for the trial because the “customer” was out on bond. My BMI dropped below 18.5, which is clinically anorexic, and my hair began thinning and falling out in the following months. I couldn’t sleep restfully or eat, and I was plagued by nightmares and hypervigilant about my children’s safety.

One of the biggest slaps in the face was the conclusion the organization came to: that I, the victim whose life was forever changed, should take a class on how to form better relationships with patients. Oh, sorry, did I do something to deserve a death threat from a “customer” I had met the same day? It’s usually the same issue, right? Giving high doses of controlled substances or not giving patients exactly what they want when they want it. We now operate like a fast food restaurant — the customer expects and should get what they want when they want it, even if it’s to their own detriment. Having an MD degree seems trivial when your job doesn’t support you and is more concerned about online reviews or losing commercial insurance patients because of higher reimbursements.

I continue to work full-time as an internist. My life has been forever changed. I finally realized there was nothing wrong with me, and though my resiliency has carried me through numerous difficult situations, the solution now was to find another organization that values hard-working physicians who practice evidence-based medicine. I have never been formally evaluated, but I have most of the signs of PTSD; my non-medical friends tease me about my over-exaggerated startle response — a direct result of the above.

These days, I’m with a new organization and hopeful of being treated better. I’m resilient, but I also now know my worth.

Take care of yourselves, my fellow MDs. Medicine is a business, and we have to look out for ourselves and each other. 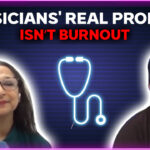 Don't lose yourself: a warning from a divorced physician