One day, working as a floater PT, I walked into the rehab gym, and every single therapist looked at me with the same pitying expression. The rehab manager took me into her office.

“I’m so sorry to put you in this position. One of your new patients today is a really large man. His BMI is 103. It took 12 people to move him from the stretcher into the bed last night. Obviously, it’s not safe for you to do any mobility with him by yourself, so let me know when you’re planning to see him, and the whole therapy team will come with you.”

I cringed inwardly, and probably outwardly too. I remember feeling overwhelmed and out of my league.

After reviewing his chart, I went to meet him by myself. I introduced myself as his PT, and I could tell as he sized me up that he was feeling at least as nervous as I was. He was kind, and we had an easy rapport. I asked him the usual history questions and about his hospital stay.

“I feel much better now, especially since I showered last night.”

“You took a shower?”

“Yeah, it was awesome. I just don’t feel clean after a bed bath.”

I clenched my jaw to keep it from dropping and searched my brain for the right words.

“I walked. My wife helped me set up the shower chair.”

Twelve people physically lifted this man from the stretcher into his bed when he could walk? As it turns out, no one considered asking him if he could stand, so he just let them struggle through the moment.

When I brought him into the gym by myself, people looked at me like I was the hulk. But I didn’t need superhuman strength to treat him. I just needed to ask him the same questions I ask all my other patients and then actually listen to his answers. It was an extreme situation, but it illustrates a pervasive issue. In the health care system, we use weight as an acceptable form of discrimination, as though it represents everything about a patient’s health or function. After reading some research, I now understand the root of weight bias in medicine.

Let’s start with BMI, which I must report for all my patients to be reimbursed by insurance. Body mass index was invented by Adolphe Quetelet, a Belgian astronomer and mathematician, in the early 1800s. His goal was to identify characteristics of l’homme moyen, the average man, and he used BMI as one measurement. L’homme moyen was used as a scientific justification for eugenics – systematic sterilization of people whose body characteristics were considered less than ideal.

In the early 1900s, life insurance companies began using BMI to decide how much to charge prospective clients. In the 1960s, physicians began using the measure as a proxy to represent a patient’s health status. In the 1970s, Ansel determined that BMI was the easiest, most cost-effective, and least inaccurate measure of health and weight– correctly identifying “obesity” about 50 percent of the time. In 1985, the NIH changed its definition of obesity to include BMI ranges. In 1998, the NIH changed its definition to lower the threshold for medically diagnosable obesity. In 2011, a study showed that BMI accurately identifies less than 50 percent of “obesity” in Black, white, and Hispanic women.

We use a measure from the early 1800s, invented by an astronomer to justify eugenics, to provide and prescribe medical care in the United States in 2022. Aside from being medically inaccurate and wildly biased against people of color, BMI places too much emphasis on weight in general. Weight is primarily genetically determined – it is almost as heritable as height and is more heritable than heart disease. It is not a great indicator of health. Over-focusing on weight and cultural biases against overweight is hugely problematic in establishing a functional patient/provider relationship.

Primary care providers spend 28 percent less time with overweight patients and are more likely to report their encounters as a “waste of time.” Additionally, providers over-attribute symptoms to weight versus considering other diagnoses or treatments aside from recommending weight loss. This attitude is recognized by patients, who then avoid clinical care to avoid judgment, shame, and poor outcomes. These two behaviors cycle together to result in worse health outcomes and an eroded patient/provider relationship. This is not inevitable. Providers can work on educating themselves to decrease bias. We can better educate students about actual data concerning the diagnosis and treatment of overweight. Providers can make changes to their clinics, like having equipment suitable for people of all sizes.

Trying to make all people feel comfortable and welcome is a step in the right direction. In my experience, provider biases against overweight are actively passed down to medical students. During my one-hour lecture on the physiology of obesity in PT school, our professor rambled about calories in vs. calories out dieting and told an asinine story about “the awkward fat friend” in a music video. If this is the actual professional education we provide to students, it’s no wonder the bias against people with overweight is so pervasive in the medical community.

It is normal and inevitable that everyone has unconscious biases. It is not inevitable to act on them. It is certainly not inevitable to utilize biased and nonscientific measures in medical care, make medical decisions, or make decisions about payment for medical treatment. It is critical to believe people when they tell us about their experiences. No one should avoid medical care because they are afraid of judgment. We should never ask twelve people to carry someone perfectly capable of walking.

Hannah Todd is a physical therapist.

Healthy patients and healthy physicians: Is it possible? [PODCAST] 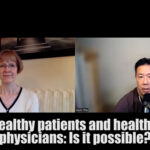