The leaked Supreme Court draft opinion in Dobbs v. Jackson Women’s Health Organization has produced mixed emotions, including amongst health care providers. If the Supreme Court does indeed strike down the rights afforded women in Roe v. Wade almost 50 years ago, it is expected that many if not most states will ban abortions outright or significantly limit women’s access to abortions. If this occurs, as physicians, we should have significant concern about women’s mental health in their reproductive years— given that by age 45, almost one-quarter (23.7 percent) of American women have had an abortion, usually due to unwanted pregnancy. Furthermore, there is a significant mental health impact on women who seek, but are denied, termination of undesired pregnancies.

Some studies have asserted that abortions cause or worsen a woman’s mental health problems. More rigorously designed studies, however, do not support these findings. As physicians, we must critically review research findings, and studies regarding abortion are no exception. Literature regarding abortion and mental health is rife with problematic designs such that the American Psychological Association has called for caution when interpreting these studies and noted that most studies in this area are seriously flawed—because of failure to obtain an adequate control group and failure to control for significant confounding factors, amongst other things. These studies often use the wrong control group, such as women who have never been pregnant, or those who have a desired pregnancy. Often, these studies also do not consider pre-existing mental illness.

The reality is that women have complicated reasons for seeking terminations of pregnancy—ranging from lack of financial resources, to interfering with education or work, partner problems, or a lack of emotional preparedness. Women who seek abortions are often dealing with many other life stressors. They are much more likely to be economically disadvantaged—three-quarters of them have a low income. Comparing happy, healthy women with desired pregnancies to the population of often vulnerable, disadvantaged women who pursue the difficult course of obtaining abortion can only generate erroneous conclusions. The proper comparison group in these studies would be women who have sought an abortion due to unwanted pregnancy, yet are unable to get an abortion— compared to women who received the abortion they sought.

The Turnaway Study considered women’s experiences of abortion, and those of women who were forced to carry unwanted pregnancies to term—the more methodologically appropriate control group. This large study included hundreds of women who had presented to dozens of abortion clinics across the USA, and either received abortions or were turned away due to timing, thus carrying their pregnancy to term. (Of note, women seeking abortions due to fetal abnormalities were not included and may represent a different group than women seeking abortions for other reasons.) The women in the Turnaway Study were interviewed prospectively every six months over the course of five years. Ultimately, the Turnaway Study found that many assumptions about the negative effects of abortion are lacking evidence. The overwhelming majority of women, years later, did not regret their choice and still believed that pregnancy termination was the right decision for them.

The assertions that women who have an abortion are more likely to become suicidal or depressed were similarly inaccurate. The studies that draw these conclusions fail to evaluate for critical confounding factors, including pre-existing mental illness and other risk factors for mental illness. Pre-existing mental health predicts post-termination mental health. Properly designed large-scale research demonstrates that being prevented from having a wanted abortion leads to negative outcomes for women. The women who were unable to obtain abortions due to timing were actually more likely to experience anxiety and low self-esteem than those who obtained abortions. Those women were also more likely to stay in violent relationships and less likely to have future goals.

Women who cannot obtain safe pregnancy terminations are quite likely to carry their pregnancy to term or illegally seek a so-called “back-alley” abortion. There are more medical risks (increased morbidity and mortality) during delivery than from an elective abortion. We know that the postpartum is the time in a woman’s life when she is the most likely to experience mental health difficulties. About one in eight mothers experience postpartum depression—rates vary depending on the population studied. Risk factors that increase the likelihood of developing postpartum depression include factors such as poor social support, teenage pregnancy, and stressful life events—factors we often see among the population of women seeking termination of unwanted pregnancies.

There are also significant implications for children born from unwanted pregnancies, especially when that child is born to a parent who is experiencing financial, social, and other forms of chronic stress. A child being unwanted is a risk factor for child maltreatment (abuse).

Women in the United States in 2022 already face hurdles in obtaining an elective abortion— but five decades ago, Roe v. Wade guaranteed that women would have certain fundamental privacy and liberty rights. Notably, no woman of reproductive age in America has experienced life without Roe v. Wade. If Roe is overruled, a woman’s agency over her body and autonomy, a basic principle of medical ethics, will be compromised. Autonomy should not be compromised for women who wish to obtain a safe medical procedure, when the only available alternatives may have such grave consequences. Physicians owe it to our patients to seek a true understanding of abortion based on properly conducted studies to help our patients navigate their mental and physical health.

Are my coping skills a result of my emergency medicine training? [PODCAST] 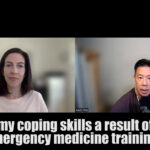 The J-1 work exemption: a flawed solution to the physician shortage

Women’s mental health in an America without Roe
6 comments