In a previous article, I described the brain-damaging effects of allowing work-life balance to fall into disequilibrium. For example, scientists from the Karolinska Institute, in Sweden, reported that burnout may weaken the connectivity between far-flung regions of the brain and may even result in brain atrophy.

A burnout crisis in medicine has been simmering for more than a decade. In 2015, researchers from the Mayo Clinic reported on a study of thousands of doctors and compared them to members of the general population. The volunteers were surveyed annually, between 2011 and 2014, using the Maslach Burnout Inventory and for overall satisfaction with work-life balance. During these years, minimal changes in the rate of burnout and work-life balance satisfaction were observed in working US adults. On the other hand, between 2011 and 2014, physicians reported a burnout score that increased nine percentage points and a work-life balance satisfaction score that decreased eight percentage points.

Not surprisingly, the burnout crisis reached a boiling point during the current coronavirus pandemic. In a 2022 article published by the LANCET, researchers from Harvard highlighted the skyrocketing rates of health care worker burnout. According to their findings, 61 percent of physicians were in the throes of burnout and a substantial number had either considered, attempted, or died by suicide. It’s been even worse for nurses; almost 80 percent of whom have reported signs or symptoms of burnout.

How to protect workers from burnout?

The burnout crisis in medicine is undeniable. But it’s not limited to medicine and it’s not limited to America. Many people complain of being perpetually tethered to work by electronic shackles. But it’s even worse: cell phones are like wrecking balls that have smashed the wall that used to separate work from life.

The answer to restoring a work-life balance and diminishing the rate of burnout, of course, is to step away from work: for sure a long weekend, maybe for two weeks in Zion National Park where cell phone signals won’t reach, perhaps even for a six-month sabbatical. But how do you determine when a six-month sabbatical is necessary; in other words, how do you know when you need a big reset to restore work-life balance?

In 2003, researchers from Duke introduced a validated survey to measure psychological resilience called the Connor-Davidson Resilience Scale. A 2020 study, comprised of thousands of physicians evaluated between 2017 and 2018, suggests that using the Connor-Davidson Resilience scale may help determine when the ability to cope with stress has neared the breaking point and irreversible burnout is rapidly approaching.

I would suggest that for certain high-risk professions, the onboarding process should include baseline determination of Connor-Davidson Resilience scores and Maslach Burnout Inventory scores. These surveys, which provide complementary and correlated information, should be repeated annually, or more frequently as needed. Scores that cross certain thresholds or change at certain rates may determine when an extended break (like a sabbatical) is required to prevent burnout. Burnout may be irreversible and may result in brain damage and we all know that an ounce of prevention is worth a pound of cure.

"This is terrible." When harsh criticism is sometimes needed.

Innovation in a rural gastroenterology practice using a farm [PODCAST] 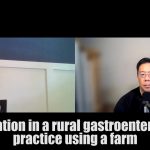