“When I grow up, I want to be a pediatrician or a surgeon.”

Those were the words I wrote as I graduated fifth grade. I often ask myself how I have been able to navigate a world so unfamiliar to me, how I have carried on with my ambitions despite being such a large minority in medical spaces. Retracing my steps, I find that I always end up with the same answer: support. While I have all these titles, experiences, and awards that seem impressive on the surface, I can assure you that my work has been simple. I show up and work hard. My medical journey started early, which gave me ample time to cultivate the connections and build the network that serves as the foundation of my academic and professional success.

My pediatric office is my earliest recollection of medicine. About five times a year I would swing open the glass double doors with the letters “Hyde Park Pediatrics” printed in big, bold, royal blue letters. I entered to the distinct smell of old carpet and lemon-scented cleaning product. My mom would hold my hand as we walked into the office together, greeting the lady at the front desk. As my mother engaged in conversation, I wandered around the waiting room. I always gravitated towards the steel gray bulletin board covered with physician biographies. Every time I looked at that bulletin board, my eyes would drift to Dr. Olutoyin Fayemi. The first thing I acknowledged about him was his skin color and that it looked like mine. I never had Dr. Fayemi as my pediatrician, nor did we ever formally meet, yet when I stared at his headshot and read through his accomplishments, I felt like I was looking at my future self. My mind replaced the name “Dr. Olutoyin Fayemi” with “Dr. Jeremiah Bonnet.” I pictured myself in the crisp white button-up shirt, snazzy patterned tie, and stethoscope draped around the back of my neck. Representation matters.

In high school, I was forced to work as soon as I was eligible to do so. About a week after I turned sixteen, I was sporting a green Shaw’s polo and learning to bag groceries. Along with playing sports, juggling honors and AP schedules, finding time to engage in community service, and volunteering at Boston Medical Center, I worked at Shaw’s a couple of nights during the week and every weekend. While I was scanning produce items and bagging groceries, my white and Asian classmates attended private tutoring sessions and took SAT preparatory courses. Although the discrepancy in resources between my classmates and me became increasingly apparent during high school, it had been present for far longer. We were in the same classes performing at a similar level, yet our lives outside of the classroom differed tremendously. Life circumstances matter.

Entering my first year at NYU, I was intimidated. I did not know how I would meaningfully impact such a large and talented community. Not to mention performing well academically. During my second week, I was paired with Justin, my mentor, whose first words to me were, “It is not a matter of if you will get into medical school, it is a matter of where. From this point on, you must work hard and accept opportunities as they come. I’ll be here to guide you.” I was coached through all the ups, downs, and in-betweens of my first year, just as Justin had promised. As a rising junior, I still speak with Justin on a weekly basis. Mentorship matters.

A successful career in medicine requires considerable groundwork that lies outside of the classroom. White and Asian students tend to see this extracurricular groundwork modeled by their parents, extended family, and the abundance of medical personnel who resemble them. Black male students do not share this luxury. But Black men are being admitted to medical schools despite having considerably lower statistics and fewer qualifications. What is the issue? Lowering the bar for Black male applicants, while temporarily necessary, is detrimental to Black men and society, as it perpetuates the characterization of Black men as less talented and academically incompetent. Because of this, we must confront our acceptance of race-based statistical norms at the foundational level—that is, addressing the academic and environmental obstacles present early on that prevent black male students from fulfilling their potential.

Addressing the lack of Black men in the world of medicine means exposing elementary school students to Black male representation in the medical workforce, creating shadowing programs for Black male students earlier in their academic careers, providing SAT and MCAT training beyond what is available to the public, initiating tutoring programs, and funding the academic pursuits of future Black male physicians who experience financial hardship. If you are committed to bringing about change in the medical space and beyond, this is where it starts.

Jeremiah Bonnet is a premedical student.

Laocoön and His Sons: suffering of those who care for those who suffer 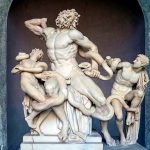 You can’t fix what is already broken