Four years ago, I was ready to throw in the towel.  I practiced for 22 years in a large metropolitan hospital, became very involved in resident education, clinical program directorship, medical staff affairs, in addition to a busy hospital-based surgical practice. I watched as the environment of care for clinicians and the quality of the relationship between the medical staff and system administration steadily deteriorated.

My small, single-specialty surgical group merged with a large multi-specialty surgical group in an attempt to improve our standing with third-party payers and other participants in our regional health care business environment. We adopted the electronic health record and relinquished control of billing to the large group’s central billing department. I participated in committees, professional societies, physician wellness groups, and activities. I poured myself into the work in every way I could, seeking to protect, maintain and improve the environment of care for our local medical/surgical professional community. I found a great deal of satisfaction in caring for patients and working within a multi-disciplinary team in the hospital. Still, nothing I did halted the steady disaffection I developed with the inexorable trend towards deterioration in the conditions under which my colleagues, coworkers, and I worked. Forces were exerted on us from every side, unfavorably impacting the nature of relationships with our patients, autonomy in decision-making, efficiency of medical/surgical  practice, complexity of business, and last but not least, physician satisfaction with the practice of medicine.

So, when conditions became adequately toxic to me, I left my practice, hospital program, coworkers, and colleagues. I opened two small businesses, purchased a third business, supplemented my income with locums assignments, putting up a tall fence between myself and those forces that were the cause of my discontent. Three years later, the COVID-19 pandemic arrived. It severely impacted my newly established small business operations, resulting in the closure of two of three business entities. Locums practice became significantly less enjoyable due to the impacts of the pandemic on hospital practice and global impacts on life in general in the communities where I served. I took a sabbatical from clinical practice until vaccination was well underway in early 2021, when I began to search for employment within the medical profession in my local community. Over six months of effort targeting a very broad scope of potential occupations, I remain in search of gainful employment in either clinical or non-clinical and non-traditional areas of medicine. I am now broadening my field of view to locations remote from my home, considering positions in places all over the nation and even international placements.

There are many, many places in the U.S. seeking general surgeons. They fall into two categories, by and large. Bread and butter general surgery in rural or small-town locales can be found in almost every state in the union. More sophisticated metropolitan locations seek surgeons with advanced skills in laparoscopic and robotic-assisted niches within the scope of general surgery. They share common features; small numbers in the call rotation, coverage of hospital emergency rooms, the need to relocate across state lines, with all of the licensure/credentialing complexity associated with major career transitions.

The current environment of practice,  described by terms such as “best practice,” “clinical guidelines,” “pre-authorization,” “peer review,” and other catchphrases, has spawned a whole industry of non-clinical positions for physicians to review insurance claims, review requests for imaging preauthorization, review charting for improved alignment with payment algorithms, manage “denial of service” determinations and other interventions into clinical practice.

I have learned that there is a “system” to applying for jobs as a physician. First, one must find and monitor a fragmented array of internet-based professional job posting sites. One should ideally have a LinkedIn account and an updated profile. One’s resume, which is distinct from a curriculum vitae, should be reviewed by a professional writer, to ensure that appropriate adjectives, adverbs, and keywords are included. This is partly to pass the first screening step by artificial intelligence applications. The screening may take place in a hospital HR department or by contracted professional search agencies, neither of whom utilize medical/surgical peers before at least two or three other steps have been taken. Some employers, such as military and academic departments, make it clear that they are searching for early career, younger individuals to fill openings in groups already employing more experienced and senior professionals. Small town employers are emphasizing the quality of living in their geographic setting.

A few potential employers will openly state that they will consider mature, experienced candidates as well as new graduates for the posted position.

Based on my extensive experience, if the application passes early screening steps, one only determines what the prospective colleagues/coworker are actually seeking after a conversation with a peer responsible for screening candidates for in-person interviews. Zoom and other teleconferencing applications have inserted a step that prevents the employer from having to fly multiple candidates out to the facility until the final steps in the process. In those conversations, I have learned that nearly no potential employer wants to seriously consider an applicant older than, perhaps, 55 years of age. The more common response to an application is no response, beyond acknowledging that application materials were received.

The average surgeon enters practice between ages 32 to 35, often after post-residency fellowship training. They then have a career horizon of 25 to 35 years before reaching retirement age. A minority will practice beyond the age of 70. So, mid-career is often reached at the age of 50+ years of age. Relatively few reach their 40th anniversary of practice.

The net result of these realities is that making a later-career transition is more difficult than finding a new graduate position despite many voices decrying a shortage of medical professionals in many parts of the country. It saddens me that there is often no opportunity to represent one’s actual experience, skills, interest, and projected career horizon beyond the confines of the brief summary contained in the resume if pre-screening steps eliminate the chance for a meaningful conversation with a professional peer. A career change expert confirmed to me that it is far more likely to find a new career position from one’s network of colleagues/coworkers than through a posting on a job website. I am learning the reasons why that is true.

Nathan Kemalyan is a surgeon.

The doctor-patient relationship has become transactional. It can lead to disastrous consequences. 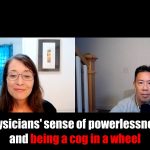 Ageism and the mid-career physician
3 comments