For 15 days, we lived at Children’s National Medical Center when our daughter Evelyn was diagnosed with leukemia. As a physician, I had felt like I had lived at the hospital before, but this was different. The first few days were a blur – long days followed by sleepless nights at home alternating with sleepless nights next to Evelyn’s hospital bed. My husband Kevin and I dressed in layers those days because the sleep deprivation disrupted our ability to thermoregulate, a phenomenon I learned all too well during my own medical training. It was a miracle that neither Kevin nor myself crashed our car driving to and from the hospital. Evelyn’s oncologist told us early on, “it’s amazing what the human psyche is capable of.” She was referring to how quickly families get used to the idea that their child is facing a life-threatening illness that will require months or years of treatment and that families adapt to life with a possibility of death. I have found this somewhat true – I now can sleep (most nights), eat (most meals), and enjoy time with both of our daughters. But, the ache that I felt in my heart as I left for the ER that Sunday afternoon after Evelyn had complained of some mild chest pain for a few days, is not any less today than it was then.

The pit in my heart is always there, but ebbs and flows. During the time we spend at Children’s, our burden seems a little lighter because we see other families carrying it as well. Inside a children’s hospital, everyone assumes that everyone else has a challenge and the tone of the entire building is one of warmth. Kind words come easier, doors are always held open, and small talk is a welcome distraction.

Evelyn sat on my lap when we heard that her bone marrow biopsy showed leukemia. We talked about it with her team, and later that night, I stepped out under the guise of getting Evelyn her post-dinner treat to call family. The only place I knew to go where she wouldn’t see me crying (again) was the hospital lobby. I was on the phone with tears dripping down my face sharing the news with the crisscross of the day shift to night shift around me. Despite this influx of people, no one stared at me or side-eyed me for such a public display of emotion. I felt a communal understanding that bad news had been received and bad news had to be shared. When I was still red-eyed and trying to pick out Evelyn’s peanut M&Ms, another family showed me how to use a credit card without swiping on the vending machines. There was no obligatory, “Are you OK?” because clearly, it was not.

Everyone in this space has a diagnosis, an appointment, a procedure, a test, a result, a hope to cling to, and a fear that they cannot possibly entertain. The world outside the hospital feels naively aloof – unaware of the center of my world. It’s not that I am secretive about this burden or wanting to hide what my daughter is facing. In fact, I wanted to hold up a sign to the truck driver staring down at me from his cab on the interstate – the tears streaming down my face are not from some petty loss – rather, I’m going through the better part of a half-crushed Kleenex box we keep at the foot of my daughter’s car seat because, despite the chemotherapy, the daily medications, the physical therapy, and the vital signs monitoring at home, our four year old has been given a number for her five-year survival that I can not push up any higher. And to get to that number, she will have to endure so much. I had an equal urge to share with the Target cashier that my frustration over the discrepancy between what blackout curtains were in-stock online versus what was actually in the store was not entirely rooted in being a privileged white woman shopping mid-week in suburbia, but because of a hope that those blackout curtains might help my child exhausted from chemotherapy just sleep a little while longer.

This eagerness to explain and be understood is blissfully suspended while we are at the hospital. I don’t worry about being judged by another adult for the diaper poking above my daughter’s waistline – maybe they’ve also convinced their child that these aren’t Pull-Ups, but rather these are “special Moana underwear that some kids wear because of the chemotherapy’s side effects.” When she’s tired and we are on our way to clinic, I don’t hesitate to pick up my almost four-foot-tall girl and carry her the same way I carry her 18-month-old sister. Caregivers here transport kids any way possible – in their arms, wagons, wheelchairs, or hospital beds.

The undercurrent of a children’s hospital is not one of the outside world, which you wonder might have caused you to put off a child’s doctor’s appointment for a few days to get work and school done – but, is rather one of a quiet understanding, an empathy, and judgment-free. It would serve us all well to operate under the assumption that everyone has a loss or a challenge or just an ache in their heart and to convey to others the same empathy we feel when we walk into our children’s hospital.

Katharine Modisett is an emergency and critical care physician.

The case of the yellow sticky note 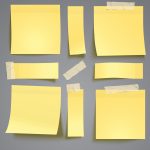