I’ve been limiting my COVID-19 related engagement with social media because this has been a rough year. I like being a resource for my loved ones about COVID-19 stuff, but it feels never-ending.

A friend of mine asked me to weigh in on a letter sent to our local school board. It claimed that masks in school were a direct assault on human rights. This letter listed references for scientific studies that claim that wearing a mask will cause hypoxia (lack of oxygen) and brain damage.

When I read it, I laughed.

Then I sighed because, of course, it’s not funny. People are reading this.

I have a book on my bookshelf at work called What if Everything You Knew about AIDS was WRONG? It was written by a famous AIDS denialist, Christine Maggiore. She was diagnosed with HIV in the 1990s then met Peter Duesberg, the famous UC Berkley professor who claimed that HIV didn’t cause AIDS. She wrote a book and started a foundation denying HIV as the cause of AIDS. She said AIDS was a hoax. She said it was all a big conspiracy. She said she was just fine, thank you, and sold books that told my patients they would be fine too.

What an attractive theory!

When I was studying to be an HIV physician, I remember buying it because I wanted to read her point of view. One of my patients was reading it, and I wanted to talk to him about it.

I was pretty confident HIV caused AIDS. But maybe I was wrong. I decided to read the book.

This was in the late-2000s. The book was published in 1996, just as antiretrovirals exploded in the treatment world, dramatically lowering the AIDS death rate. The medications work by targeting the HIV, so the theory that HIV didn’t cause AIDS wasn’t holding up.

The author doubled down on her beliefs and refused medications. She continued to say she was fine and AIDS was a hoax.

By the time I bought the book, the author and her child had both died of AIDS. Her gamble was a bust.

When I bought the book, I was still learning the landscape of HIV medicine. I just wanted to read what my patient was reading. I thought it would be the start of big conversations with my patient, and maybe it would bring up things I hadn’t thought of.

Instead, it ended up being a pretty quick conversation. We Googled her and saw how wrong she was: dead wrong. The medicines work, and people who take them live long, healthy lives. She didn’t take them, and she died, just like so many other AIDS patients before the miracle of antiretrovirals.

We had the luxury of looking backward at the controversy. My patient kept taking meds. He threw the book away. Last I heard, he was doing just fine.

I kept my copy to remind me to keep an open mind and that some controversies resolve in time.

The questions we are asking have answers.

Ten years from now, there will be things I was right about all along and things that will humble me.

One of my professors in medical school said, “By the end of your career, half of what we teach you will be found to be wrong. We just don’t know which half.”

If wearing a mask causes hypoxia and brain damage, what does that mean for surgeons?

People in operating rooms wear masks all the time. Long operations are incredibly technical work. Everyone who ever stepped foot into the OR as a student has to mask.

If you walked into the OR and announced you wouldn’t wear a mask, the scrub nurse will eat you for breakfast.

Ask any nursing or med student who accidentally touched something blue on their sterile table.

When you scrub in for a 9-hour Whipple procedure, your biggest concern is your bladder, not your mask. You’ll be fine. Relax. Don’t touch anything blue.

The discussion about masks has always been about whether they help prevent COVID-19. No self-respecting medical professional thought masks were causing hypoxia and brain damage.

But you know what? Maybe I’m wrong.

I read the articles listed in the school board letter. It was disappointing. The data was terrible.

They claimed widespread agreement by the medical community about the harm of masks.

With a little reading, you find that isn’t true. It wasn’t convincing.

One was published in Medical Hypothesis – an obscure journal whose claim to fame is to publish “radical new ideas and speculations in medicine which most conventional journals would reject.”

Their publication fee is almost $2,000, which is generally a bad sign; high publication fees are often seen in predatory journals that publish anything for the lucrative fees.

I remember Medical Hypothesis. That was the journal that published articles where Peter Duesberg said HIV didn’t cause AIDS.

Not great company to keep.

In the school board letter, the last reference was a YouTube video.

My least favorite form of communication is when someone presses play on their phone and turns it toward me, saying, “Here, you need to watch this,” while I stand, captive and horrified by what is happening, in the hospital hallway between patients.

This is why we can’t have nice things.

So I read the articles, I watched the YouTube video, then wrote my letter.

Masks are not causing brain damage in our school children.

I may be damaging my brain this year, but it’s not from masks.

An acupuncturist's take on the doctor-patient relationship [PODCAST] 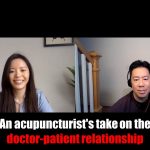 I'm a doctor who had COVID. Did I deserve this? Does anyone?

I may be damaging my brain this year, but it’s not from masks
2 comments