The highly anticipated A Promised Land was the first book I could not wait to crack open over my two-week break for the winter holidays. Former President Barack Obama explains in his introduction that this work is the first of two autobiographical accounts covering the period from his state legislature run in Illinois through his presidency. This masterwork takes you through every decision he makes and helps illustrate just how much thought, work, and effort goes into every action a president takes. As someone who has previously criticized many politicians for a failure to live up to lofty claims, this book gave me a healthy reality check about balancing idealism with practicality.

Obama became a beacon of hope during his first presidential campaign in 2008. His youth, race, and fresh ideas led many to believe he would bring needed change to the Washington political scene. Even before taking on the overwhelming responsibility of the presidency, he worried that he would never be able to live up to the dreams he now embodied. In any political climate, the president is limited by the checks and balances of our Constitution. For Barack Obama, he would come to face some of the most excessive backlash and resistance from the Republican House and Senate that our nation has ever seen.

In circumstances where it feels like nothing you do will ever succeed, no matter the amount of effort or time you dedicate, it can be tempting to give up. Why try in the first place to pass new legislation when you know there are certain politicians whose singular mission is to destroy your legacy? This acceptance of failure is understandable, but greatness has not come from those who concede easily in the Oval Office. There is one scene in the book where Obama goes to Oslo to accept his Nobel Peace Prize. The many trials he has begun to face flicker through his mind – Americans fighting in Iraq and Afghanistan, Russian repression of democratic ideals, daily cruelty experienced all across the world – and he wonders how anyone could create meaningful change. However, the city has a tradition where citizens come and stand outside the winner’s window with candles to visibly demonstrate their support. In the field of flickering candlelight, Obama sees people who have pushed back against despair and hopelessness to fight for better. “Whatever you do won’t be enough,” he heard their voices say, “Try anyways.”

When I read this book over break, I couldn’t help but wish I had encountered that beautiful scene a couple of weeks earlier. I completed my general surgery rotation in December. The rotation brought me lots of experience and wonderful mentors that I am grateful to have, but it also exposed me to much sicker patients than I have previously been working with. Most mornings, I would head to the ICU at 5 a.m. to pre-round on one of our patients. Typically, I love rounding on my patients because I get to speak with them, spend time, and generally learn about who they are and what makes them happy. However, some ICU patients are unable to speak or interact at all due to intubation or sedation or high acuity illness.

This lack of interaction with people whom I was trying to understand and help took a toll on me emotionally. It broke my heart to see them so sick and alone in an ICU during COVID precautions without any visitors allowed. One patient in particular that I saw a few times seemed to be in so much pain without much hope of recovery. I asked my senior resident what the best-case scenario was in terms of optimal improvement, and she said probably the return of eye movement was the most we could hope for with this patient. These stories made me question my ability to help, either as part of the general surgery team or as an individual. How could we help him as a medical team when recovery seemed futile? How could I help him through our interactions when he was not aware of my presence?

Much like presidents, doctors can never be great or even mildly useful if they surrender at the first sign of difficulty. It takes courage and commitment, and sometimes a little bit of denial to continue fighting for your patients. When I think back over this clinical third year that is now half over for me, I remember my first article about the Plague and a doctor who never gives up in the face of adversity. I suppose I just needed a reminder from someone outside the medical field who nevertheless understands carrying on without surety of success. As I remember these past six months, so many patients come to mind who act as my own field of flickering candlelight to remind me to try anyways.

This physician is overwhelmed. She is not alone. [PODCAST] 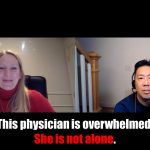