The student is last on the list. But he is not fixed in that position such that he can consider some space to be his own. He must be ready to be last in any formation that the list may hold. And if, for some reason, there is no room for him on the list, at last, he becomes first! First to be removed.

The student is a guest in the room. He must ask before making any decision, even the decision to not decide requires consent from his superiors—which is anyone but him. There is no bar, however, from decisions being made for him, which he should always accept and happily comply with.

The student is sacred. He does not exist to satisfy his curious eyes. Rather, he is an element in the grand scheme by which medicine is carried on to the next generation. It is the noble patient who allows the student to be present, and it is the noble physician that takes the student under his wings.

The student must always be ready to do everything and to do nothing at any point and at any time. Sometimes people do not realize how hard it is to do nothing because everything is encompassed in that “nothing.” Anything can be asked from him during that period, including doing nothing somewhere else or accepting ridicule for doing nothing.

When a student asks if he can observe a procedure, the answer can go in any direction. It can be, “Of course! I need you there. I need your help!” which is a good and pleasant answer. It can also be a pointed, “No, not this patient, not today, not this procedure” or any variation thereof. Lastly, it can take the tone of a statement relating that it makes zero difference whether he does or does not participate, which means that the question should have never been asked in the first place.

He may be told, with complete authority, that for a particular rotation, he should not, for example, wear a lab coat. On day two though, with a different preceptor or attending, he may be asked where and why he does not have a lab coat, for which the answer should be something to the effect of I am getting it, and I am getting it fast. He may be told to be back within a certain number of minutes only to rush back and wait around longer than that number.

Because every attending does things their own way, which is the correct way, the student must do it in the way the attending wants it to be done. One attending may condemn the student for walking too far behind him, while the other may condemn him for encroaching in on his bubble.

The student is told that he is judged by everyone, from the patients to the office staff, to the cameras on the wall, yet he must also be ready to go unnoticed. He will walk around the hospital as a man in a half-white coat, feeling like he is taking up underserved space, perhaps that of some other being meant to judge him. When he completes his rotations, in which he did everything or nothing at all, he must ask for nothing less than an enthusiastic letter of recommendation for being a vital part of the team.

The student may attempt to reason his way through these difficulties by appealing to logic. It is indeed a fact that every resident was once a student, and every attending was once a resident. But this appeal is most certainly a mistake. When a resident becomes a resident, he ceases to have ever been a student. The years that made up that part of his resume, in which he has perhaps worked as hard as a human possibly can, have been purged. And the same is true for when the resident becomes an attending. I even had a 4th-year student treat me as if he was never a 3rd year.

If a student finds himself in a room with an attending, and the attending commits the simple act of walking out, the student is immediately in a no-win situation. Should he remain seated and leave the attending on his own, he risks the attending having gone somewhere where his aid was vital, such as transferring an obese patient. Should he proceed to follow the attending, he may find out that he was heading to the restroom, and the student should have known that.

Why not just ask the attending if he should follow him or not follow him? Because this is sure to be a losing prospect. All answers should have already been known by the time one reaches the wards.

I have been greatly impressed by one attending. I was observing him as he was trying to get ahead of an ever-expanding list of radiological studies that awaited his interpretation. In between talking into his dictaphone at a rate not less than double that of ordinary speech, he found moments to bestow upon me tidbits of his knowledge. He did so without reminding me how small I am compared to his expertise, and how far behind him I am in my journey. He saw me for whom I may one day become instead of the tiny man I currently am. Through his eyes, I will see myself, and it is like him that I aspire to be.

Genital shrinkage is real. And so is the distress it causes.

Think you have an iodine allergy? You may want to reconsider. [PODCAST] 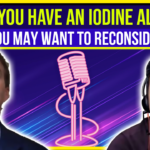