Ever since the COVID-19 pandemic gripped New York City, I have come to dread calling home to my parents. Every conversation ultimately leads to the question: “Is everyone okay?” This is always followed by a pause as my parents consider how much to tell me. Over the past few months, I learned on an almost weekly basis of a new family member, family friend, or neighbor who was hospitalized, transferred to an ICU, or succumbed to the virus. The loss of life and disproportionate impact of COVID-19 on my family and community are a glaring reminder of my roots and how our backgrounds influence health care outcomes.

My parents are from Guyana, South America. Guyana is a blend of cultures; the amalgamation of African and Indian Diasporas interspersed with the indigenous tribes, shaped by the British Empire. It is one of the poorest countries in the Western Hemisphere, infamously known for the Jonestown Massacre and the highest suicide rate in the world. Due to the country’s political instability and economic hardship, my parents immigrated to the United States in 1981. They settled in Queens, New York as part of a wave of migration that resulted in the largest Guyanese population outside of the country.

Born and raised in Queens, it is where I consider home even as I live in Boston now. With over 800 languages spoken and half of its population foreign-born, it is one of the most diverse places in the world. It is also where I made lifelong friends and met my wife at our public high school in Flushing.  Throughout my childhood, there were subtle signs that we were poor, but my parents masked it through their hard work and determination to provide us with a comfortable life. In my eyes, we were living the American Dream, and we had all we needed.

However, life as we knew it was upended when my eldest brother died in handcuffs. At the age of 32, he was overweight, diabetic, depressed, and addicted to alcohol and drugs. During one drunken night, he hit a parked car. He was relatively unharmed from the accident; he only had a few scratches but was taken by the police to the county hospital. We never found out why he was hospitalized – we were told, “You know why he’s here. It’s because he drinks too much”. In retrospect, I wonder if that was their way of saying he was going into alcohol withdrawal. Regardless, he was intubated on hospital day five for agitation, and died two days later from a massive pulmonary embolism, still handcuffed to his hospital bed. We did not question or know to question why an intubated patient needed to be handcuffed on both his hands and feet. We did not know that lying immobile in a bed was a risk factor for a pulmonary embolism. We did not realize that Guyanese individuals were considered a “problem minority group” at that hospital, and our care more than likely suffered as a result. I did not have the words for it then, but my brother’s death was my first lesson on the social determinants of health.

Afterwards, I changed my career path to pursue medicine. It wasn’t easy; as the first in my family to become a physician, I had little guidance. My college advisor even told me, “I would never be a doctor.” My journey through medicine has been challenging but serendipitous, and eventually, I met many amazing mentors and colleagues who believed in me and pushed me every step of the way. This path led me to train at Morehouse School of Medicine and now at the Harvard BWH-MGH Neurology program, where I currently serve as a chief resident.

During my training, I have witnessed firsthand the impact that diversity and social policy initiatives have on patient care and outcomes. Consequently, I have made it my mission to bring about positive change in public policy in addition to providing individualized care to those who need it most. However, I recognize I cannot do it alone. We need a collective effort to address centuries of institutionalized biases built into our health care system. It is now more important than ever that we collectively push for positive changes as entire communities have been devastated by COVID-19, and the disenfranchised reach a new boiling point of frustration and anger towards a society that has failed so many. Whether it is ensuring our patients have access to professional medical interpreters, calling out unconscious biases in the work setting, or fighting for changes at the policy level, we all have a part to play. Silence or inaction is tantamount to tacit approval of the systemic abuses that have contributed to poverty, lack of health care, and marginalization in our country. COVID-19 and our current political environment have meant many things to me. I think of my hometown, which has been desolated by the pandemic. For every life that is senselessly lost, I see my brother, who also died in police custody. The past few months have been a reminder of how far I have come, but as I reflect on my community and the nation, it’s a reminder of how much more work still needs to be done.

Josh Budhu is a neurology resident and can be reached on Twitter @joshuabudhu. This article originally appeared in Neurology Blogs. 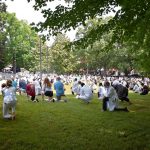