An excerpt from It’s All In The Delivery: Improving Healthcare Starting With A Single Conversation.

On that night when the desperate call came to pick up the critically ill baby with MAS, I felt very fortunate that Dr. Cunningham was my supervisor.

When I arrived at the hospital in New Jersey, it was apparent that the tension in the room was high. At the referring hospital, the baby was receiving 100 percent oxygen delivered by a mechanical ventilator that was performing at its limits. I assessed the situation, spoke to the parents, and obtained the necessary consents for transport and placement on ECMO. This was not a procedure to be taken lightly. It is associated with many possible complications, including stroke, bleeding, and infection, but as I explained to the parents, getting their son to TJUH and on the ECMO machine as fast as possible was his only chance of surviving. I politely informed the father that he would not be allowed to accompany his son in the ambulance and got the necessary signatures.

The parents gave their son a quick kiss on the cheek and we wheeled the baby as quickly as possible into the ambulance, lights, and sirens blasting. By everyone’s estimate, there was not much time. The ventilator was failing to keep the blood oxygenation levels up, and despite epinephrine, IV fluid boluses, and every other treatment we had to offer, the baby’s heart rate drifted slowly down. I called Dr. Cunningham who could only add assurance that we were doing everything we could do and that the surgeons were ready to place the baby on ECMO as soon as he arrived. As we made our way back over the Ben Franklin Bridge to Philadelphia, the baby’s heart rate continued to drop— the oxygenation of his blood still not adequate.

By the time we arrived, we were performing a full resuscitation, including CPR on the baby. Dr. Cunningham took charge of the resuscitation when we arrived. We could not place the baby on ECMO unless we could first get him to first respond to the CPR. The surgeons waited gowned and gloved to see the outcome of our efforts.

CPR continued and multiple rounds of adrenaline administered, but the heart rate never returned. Dr. Cunningham instructed the team to stop CPR and pronounced the baby dead. It wasn’t long before the charge nurse informed us that the father had followed the ambulance and was anxiously waiting for an update, completely unaware that his son had died. Dr. Cunningham asked the nurse to have the father wait in his office.

At the time, I saw this tragedy as an opportunity to learn a life lesson. It was a skill I needed to learn desperately, but one that scared me to death. A skill that, unfortunately, I would need many times during my chosen career: how to tell a parent that his or her newborn baby passed away. This was a perfect time to learn. After all, who better to learn from than Dr. Cunningham, who was one of the kindest and most intelligent doctors I knew?

I asked Tim if I could come with him to speak to the father and observe how he broke the bad news. Of course, he said it was fine. Without saying another word, we walked together down the hallway to his office that doubled as the on-call room for the neonatologists. We entered the room to find an extremely anxious father pacing back and forth. What happened next was, and still is, inexplicable to me. This gentle and caring doctor, whom I’d come to admire greatly, simply blurted out, “I am Dr. Cunningham. Your baby died.”

I was shocked. “Did he just do that?” I thought. The father, who was still standing, was totally blindsided by the news. Total shock set in and the father went crazy. He banged the wall with his fist, screamed loudly, and knocked over the table lamp. I didn’t know what to do. He spewed out profanity and screamed in a tone that I had never heard before. Dr. Cunningham froze. He wasn’t doing anything. He was just standing there as if he knew he had just done something terribly wrong. I took a step forward and tried to say something to the father, but Dr. Cunningham put the back of his hand in front of my chest and said, “Let him be.”

The next minute of screaming seemed like an hour. The father eventually caught his breath and took Tim’s invitation to sit down. As the two sat together, I stood in the back, still recovering from the shock of what just happened. Tim seemed to gradually get back to his true character as he spoke softly and with compassion as the father cried. That was the Dr. Cunningham I knew.

After a brief discussion and some more crying, we escorted the father to the room where his dead son lay. We stayed with him for a minute or so and then left him to be alone with his baby. As I walked out of the room, Tim stopped me in the hallway. Standing in front of me, he put both hands on my shoulders and looked me right in the eye. I could see that his tears were swelling. Then, with deep sincerity in his voice, he said in a firm, deliberate, staccato-like manner, “Do you see what I did? Don’t ever do that.” And without saying another word, he turned and walked away down the hallway toward the fire escape to gather himself, still crying.

That day changed me forever. It affected me profoundly, and increased my already deep fear about communicating bad news. If Tim could mess this up so badly, what chance would I have? This was something I had to learn and fast. What did he do that made the father react with such anger, or was it just a random reaction? Is there a right way to break bad news, and if so, how can it be learned and taught?

Anthony Orsini is neonatologist and founder, The Orsini Way. He is the author of It’s All In The Delivery: Improving Healthcare Starting With A Single Conversation.

COVID-19 is not a Chinese virus, nor an Asian virus. It is a human virus. 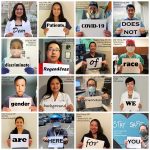 Is there a right way to break bad news?
1 comments