A 38-year-old man is evaluated for a 6-month history of dyspnea on exertion. He has gastroesophageal reflux disease and Raynaud phenomenon. He does not smoke and has no cough or wheezing. Current medications are lansoprazole and amlodipine.

On physical examination, vital signs are normal. Oxygen saturation is 91% breathing ambient air. He has scattered telangiectasias on the face and trunk and sclerodactyly. Lung fields are clear on auscultation.

The only abnormality on pulmonary function testing is a DLCO of 43% of predicted. High-resolution CT of the chest shows no evidence of parenchymal lung disease.

Organizing pneumonia is a patchy process that involves proliferation of granulation tissue within alveolar ducts, alveolar spaces, and surrounding areas of chronic inflammation. There are many known causes of this pattern, including acute infections and autoimmune disorders such as rheumatoid arthritis. The term cryptogenic organizing pneumonia (COP) is reserved for individuals who have this pattern but do not have a clear associated cause. Patients with COP will typically present with symptoms during 6 to 8 weeks that mimic community-acquired pneumonia. Evaluation typically demonstrates bilateral diffuse alveolar opacities on chest radiograph with normal lung volumes. This patient’s presentation is not consistent with cryptogenic organizing pneumonia. 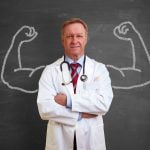 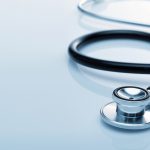