I’m an orthopaedic surgeon, but if you told me I’d be here when I graduated from college, I’d be laughing at you. When I got started in college, I thought I was going to be pre-med and apply to medical school. It was not a well-thought-out decision. I thought that this was what good Chinese-American children do: Grow up to become doctors. It became clear that this goal was parent-driven and not my own.

At UCLA as a new freshman, I walked into my very first class, Bio 101, or whatever it was called back then. Although I came from a medium-sized high school, it sure was shocking to walk into a class of 600 other students, all vying for the pre-med track. Although I enjoyed biology, I very quickly got weeded out of this class. Indeed, these were called the “weeder” classes for a reason. Now, here I am, a freshman in college with what I thought was going to be a well-defined plan, without direction.

So I decided to take classes that just sounded interesting to me, and at the end of three years, I found that I had a lot of sociology credits and a lot of psychology credits. To be honest – I could have flipped a coin. Looking at which major had the edge in terms of a faster route to graduation, I decided to be a psychology major. It’s a quirky way to decide on a major, but at the time, I hadn’t had a long term goal in mind, so I figured graduating would at least help me meet a goal and move on to the next adventure. I did find psychology interesting though (still do!) and found myself applying for graduate programs in psychology as a default next step. But fortunately, I realized that it was not what I actually wanted to do. It would’ve been an expensive detour how do I not.

Although I was in a major that I enjoyed, I’ll have to say I lived the full college experience. I learned who I was, I made lifelong friends, but I can’t say I had the best GPA. While I can technically say I finished with a 3.0, it is only because I can round up from 2.9997! Not exactly the picture of a future doctor.

After I graduated, I again chased my passions which were not necessarily academic, and I worked in the snowboard industry. I loved to snowboard, and I had even entered a competition or two in my younger (and more limber) days. I worked for a small snowboarding company in sales and marketing. I traveled around the country, visiting snowboard retailers and selling our goods. I attended competitions, tradeshows and rubbed elbows with athletes and retailers, marketing our boards. It was so much fun, but boy, it sure paid nothing!

I then fell into a position where I became an event coordinator, Mandarin language translator, and ran a small office. It was during this time that I had the opportunity to take some coursework in Chinese medicine and acupuncture. I found it interesting, but not necessarily what I wanted my life career to be. I have the good fortune at that time of working pretty closely with some physicians that also had an interest in complementary medicine, and it dawned on me that my path was supposed to include medicine after all.

At that time, I was already four years out of college with no pre-med classes under my belt. I had naysayers, and my internal voice wondered if I were smart enough, still young enough – but I decided to go for it. While I was working full-time and often traveling three weekends out of the month, I pieced together my post-baccalaureate classes to meet the requirements, sometimes driving all over the Los Angeles area to attend evening classes at the various Cal State and UCLA extension programs to get my requirements done. This time around there was no weeding out. I had clarity of my mission, and I was serious about getting medical school this time. I aced my classes and got very close to a 4.0. I studied hard for the first time in my life. It was during this time that I figured out what study styles worked for me and what did not – and in doing so, I got a great score on the MCAT.

I applied to medical school and was admitted the first time around. Going in for interviews, it was beneficial to be just a little bit older and have had working experience. I came into medical school much more mature than I would have had I come in at age 21. I felt that this served me well also as I got into my third and fourth your clinical rotations. I was able to relate to people of all different ages because I have done so in my prior work. I felt that I took my schooling so much more seriously but at the same time being more mature, understood that it was still important to have a release valve and have fun too. I was able to effectively have school-life balance, doing well in classes and rotations but staying well-rounded.

I have a lot of aspiring medical students ask me about my path and how I got there the nontraditional way — even with a low GPA to start. I often share with them the lessons I’ve learned along the way:

I think some of the lessons that I would take from my pathway is that it’s never too late and that it is important to be introspective about why you choose the career path that you do. It’s important to reassess and reevaluate what your values are so that you know that what you are doing is going to continue to make you happy and feel fulfilled. These can change over time, and I encourage this not only of younger people hoping to get into medicine but even my peers or those older than me mid-career who are asking themselves if they are still where they are meant to be.

We often have fear of change, and this fear can be paralyzing. Whether it is the college graduate who did not go right into a professional school or someone who is mid-career who feels that so much time and resources have been put into their current position that it is “too late” to make a change – fear drives stagnancy. For me, as I pivoted to apply to medical school, getting over this fear was a big part of my ultimate success in taking the steps to apply and gain admission to medical school.

Another piece that is really important is when somebody asks you why, say why not? There are a lot of people who along the way told me various reasons why I shouldn’t go for it. I always encourage those around me to prove people wrong when they’re told that they can’t do something.

Ultimately it takes introspection and evaluation to get over these external barriers. It doesn’t matter what external barriers are present; if the internal ones aren’t addressed, no forward progress can be made.

A patient's tale of type 2 diabetes 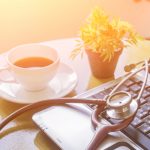